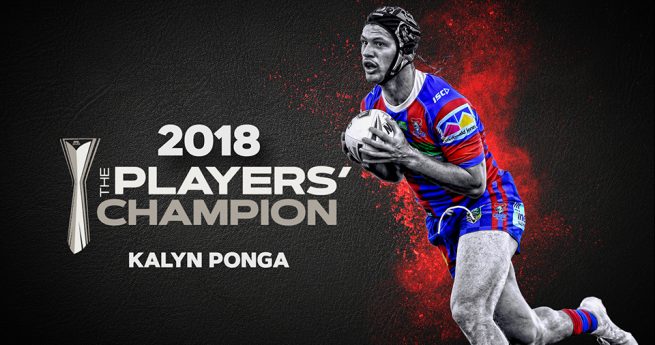 Newcastle Knights fullback Kalyn Ponga has created history tonight by becoming the youngest ever recipient of The Players’ Champion.

The 20-year-old received the ultimate recognition from his peers at the Rugby League Players’ Association’s annual awards night, held at the picturesque Doltone House at Darling Island.

The Queensland Maroons representative was anointed the best performer of 2018 based on a revamped voting system that canvassed the views of more RLPA members than ever before.

Previous winners of The Players’ Champion include James Tedesco (2017), Jason Taumalolo (2016), Danny Buderus (2004) and Johnathan Thurston (2005,2013-15) – with the latter considering the award as “the highest individual accolade a player can receive.”

RLPA CEO Ian Prendergast congratulated Ponga on a stellar 2018 season, which included 20 appearances for the Newcastle Knights and a State of Origin debut.

“It’s incredible that at such a young age, Kalyn has already gained the recognition from his fellow players as the best performer in 2018,” Mr Prendergast said.

“Despite the Knights not making it through to the finals this season, Kalyn continued to put in dominant performances throughout in his first-year at the club.

“The RLPA membership have had their say and for a 20-year-old to be voted the best by his peers, it just shows what a prestigious talent the Newcastle custodian is.

“We have witnessed somewhat of a changing of the guard in 2018, with the emergence of young stars with plenty of character and a number of the game’s longest servants retiring.

“On behalf of the RLPA, I want to congratulate Kalyn and all other award recipients at tonight’s event.”

St George Illawarra Dragons star Jason Nightingale received The Dennis Tutty Award for 2018 – recognising his enormous contribution in the wellbeing and education space, his efforts as founder of the Elite Athlete Business School and engagement as an RLPA delegate.

Tutty, a former Balmain, Penrith and Australian player, was on hand to present Nightingale with the honour that each year recognises an individual who has acted in a selfless way in advancing the interests of their fellow players.

Australian Jillaroos star and captain of the Sydney Roosters WNRL side, Simaima Taufa, was recognised as the Elite Women’s Player of the Year for her strong Rugby League World Cup campaign.

North Queensland powerhouse Jason Taumalolo continued the rise of Tonga in the International arena, edging out finalists from Australia, Fiji and Papua New Guinea to be named Representative Player of the Year.

Perhaps one of the hottest contested awards of the night was Rookie of the Year, with NRL players voting in favour of Sydney Roosters hitman Victor Radley ahead of Jamayne Isaako, Alex Brimson, Rhyse Martin and Jesse Ramien.

The Players’ 13 Dream Team, a concept introduced just last year, produced a completely different side compared to how the votes stacked up 12 months earlier, with RLPA members opting for the inclusion of rising stars Isaako, Esan Marsters and Viliame Kikau.

The event also paid tribute to the star-studded list of players transitioning out of the game in 2018, as well as the five new additions to the illustrious ‘300 Club’.