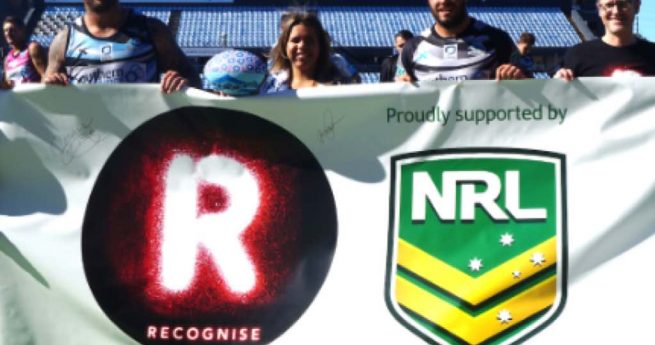 NRL stars Andrew Fifita and Wade Graham were amongst those to throw their unconditional support behind the RECOGNISE movement at Sharks training this week.

In further cementing the partnership between the Cronulla Sharks and RECOGNISE, the movement helping to raise awareness of the need to end the exclusion of Aboriginal and Torres Strait Islander people from the Australian Constitution, the Sharks duo joined team mates in signing a special banner, one which will travel the country in support of the cause.

The 3 metre by 1.5 metre banner will feature at NRL matches and will give players and clubs the opportunity to sign on and help RECOGNISE to raise awareness about the need for recognition and dealing with racial discrimination in the constitution.

The Sharks, who joined with RECOGNISE back in 2013 and have worn the ‘R’ on their NRL playing shorts since the first round of the 2016 season, were the first club to sign the banner ahead of this week’s Indigenous Round of matches.

RECOGNISE movement Joint Campaign Director Tanya Hosch praised the Sharks for their leadership and for playing a crucial role in helping to spread the word and to bring the issue to the forefront of people’s thinking.

“Week after week we watch them play, we watch them win and we know that every week with their support for RECOGNISE they are starting conversations about recognition and ending racial discrimination,” Ms Hosch said.

“Through their actions, including their signing of the banner this week, the Sharks are encouraging more and more people to become aware of the RECOGNISE campaign and to be a part of this very important movement.

“Getting recognition in and racial discrimination out of the Constitution is for all Australians and the Sharks and their supporters are an example of how everyone can contribute,” she added.

In beginning their partnership three years ago, continuing throughout 2016 and ramping up this week during the NRL’s Indigenous Round, as explained by Tim Thorne, Sharks Head of Community Engagement, the club has a strong connection with RECOGNISE and are pleased to be assisting them in highlighting what is a significant issue.

“We are proud of our association with RECOGNISE and hope we can play our part in them gaining the constitutional changes they are seeking,” Thorne said. “This is something we as a club believe in and is something we are certain our players and fans will also get behind.

In addition to the NRL squad playing with the ‘R’ on their shorts and their signing of the RECOGNISE banner, a young local artist Savannah Roberts, a former Endeavour Sports High School student, avid Rugby League fan and a member of the Sharks School To Work program, has hand-painted an NRL football with indigenous art to emphasise the link between the Sharks, RECOGNISE, the NRL and indigenous culture.

During the 2016 NRL Indigenous Round the Sharks will be joined by the entire NRL in supporting RECOGNISE and their push for constitutional change.

The Sharks, who currently sit equal top on the NRL Premiership ladder will take on the Newcastle Knights this weekend, with both teams to invite the thousands of spectators in attendance on Sunday to join with them in support of RECOGNISE.