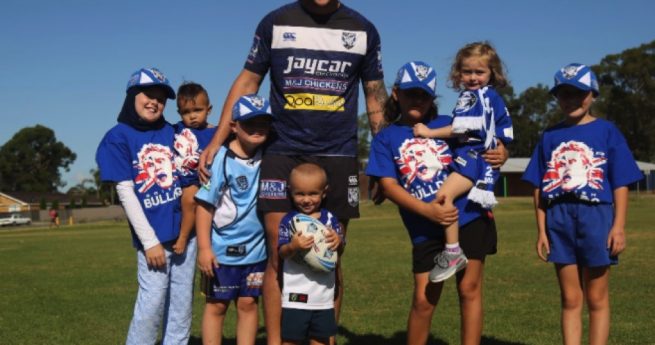 “Let Them Play”, an educational video series for grassroots clubs, features strong “Respect” messages from current and past Origin greats and Junior League players, taking a stance to stop negative behaviour at footy grounds across the country.

At the heart of the campaign are messages such as “let them play and enjoy what they are doing”, “it’s all about having fun with your mates, not about winning”, and that pressure from coaches and parents is “embarrassing”, “scares them, intimidates them” and “makes kids give up sport”.

Klemmer echoes those sentiments: “When I was a kid all I wanted to do was play footy. It wasn’t about winning or losing, it was about having fun with your closest mates.

“Kids should feel comfortable on the footy field and not have to worry about what happens on the sidelines.  It’s just a game. Parents do not need to step in and let their egos get the best of them.”

NSW Rugby League started their campaign to “Let Them Play” this month following the kick-off a variety “Respect” protocols in the 2016 Junior Representative competition a few weeks ago.

From Harold Matthews (under-16s) to the state’s premier senior competition, Intrust Super Premiership NSW, NSWRL is introducing a number of protocols and procedures to ensure players and coaches preserve a strong relationship with referees, as well as respecting their opponents, all officials and spectators.

Captains and coaches across all competitions are now required to sign a “Respect” pledge to act in a manner that displays the core values of the game – excellence, inclusiveness, courage, teamwork and respect.

NSWRL CEO David Trodden said: “This is a fantastic move and we are confident these new practices will strengthen the respect not only referees warrant, but players, coaches and also spectators.

“The videos add to the strong message that there is no place for offensive behaviour in our game.”

NRL Head of Football Todd Greenberg said it is important for parents, spectators, players and officials to understand the key role they play in helping the game to  eliminate offensive behaviour on the Rugby League field.

“Essentially the campaign is about educating parents, coaches and players on the role they play in creating a positive environment to play Rugby League, Touch Football and Tag,” Greenberg said.

“They need to buy into it. The players featured in the videos recognise the responsibility that comes with playing our game and believe there is no room for unruly or troublesome behaviour.”

The video series, which also includes True Blues Josh Dugan, Michael Ennis, Boyd Cordner, Beau Scott and Craig Fitzgibbon, will be used throughout various stages of the Rugby League season to assist with providing a respectful environment for everyone involved in the game.

You can view the video on the NSWRL website.