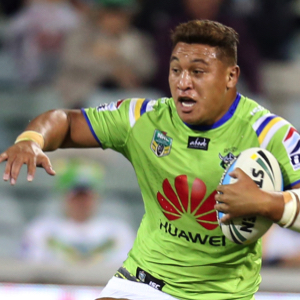 The Canberra Raiders have secured second rower Josh Papalii on a new contract through to the end of the 2018 season.

Papalii joins Jack Wighton, Shannon Boyd and Joey Leilua who have all recently re-signed with the club.

2015 was a huge season for Papalii, as he regained his Queensland State of Origin Jersey with a string of outstanding performances for the Raiders. Papalii played all 24 matches for the Raiders in 2015 and passed 100 NRL career matches.

Papalii said he’s found a home in Canberra and said he was confident he could continue to build on his career with the Raiders and help the club achieve success over the next three years.

“I’ve been in Canberra for a while now and it’s become a home for me so I’m really happy to be staying with the Raiders and continuing my career here,” Papalii said. “The Raiders have helped me become the player I am today and without their support I wouldn’t be where I am.

“I think with the right attitude and hard work we can definitely be a very successful team over the next few years and I can’t wait to start next season.”

Raiders CEO Don Furner said Papalii’s re-signing was another huge step for the Raiders future plans and said Josh had become one of the clubs stars.

“There’s no doubt Josh is one of our most important players and his efforts this season have shown how good he can be for our club,” Furner said. “We’re really excited to have Josh re-sign with the club and his announcement today continues our plan of retaining a squad we think can be successful in the future.

“He’s played over 100 NRL matches now and we believe he’s starting to come to the point of his career where he’ll play his best football.”