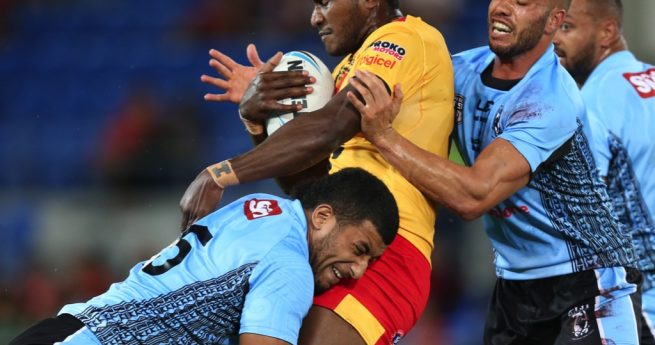 Ottio arrived in Canberra at the beginning of the 2016 pre-season on a train and trial contract, with his performances on the training paddock, at the Auckland Nines and the Raiders trial match against the Knights allowing him to secure a two year deal.

The former PNG Hunter said he’s excited about having the opportunity to continue his time at the Raiders and was excited about the next chapter in his young career.

“I’m very grateful that the Raiders have given me the chance to train with them and to have a two year contract is a dream come true for me,” Ottio said. “The pre-season has shown me how hard you have to work if you want to make it in the NRL and I will make sure I keep training hard so one day I can live my dream of playing in the NRL.”

Raiders Football Manager John Bonasera said the Raiders coaching staff had been impressed with Ottio’s work ethic and attitude since arriving in Canberra and they looked forward to watching him continue his development over the next two seasons.

“We’re really excited for Kato. From the minute he arrived he put in a determined effort and met all of our expectations and we believe he has great potential for growth,” Bonasera said. “Over the past few seasons the club has worked on establishing a strong culture and Kato displays a strong set of values and a willingness to work hard in order to succeed. We look forward to seeing Kato continue this progression over the next two years.”

Photo: PNG international, Kato Ottio, is wrapped up by the Fijian defence during the 2015 Pacific Test (nrlphotos.com)