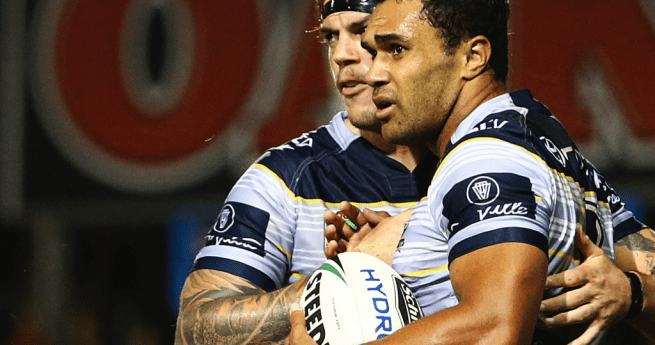 2015 Premiership-winning duo Justin O’Neill and Ethan Lowe have re-signed with the North Queensland Toyota Cowboys through to the end of 2018.

“It’s a huge boost to be able to sign both those guys, who are probably just about coming into the prime of their careers,” head coach Paul Green of the signings.

O’Neill, 25, is in his second season with the Cowboys and has found a home at right centre, scoring 20 tries in his 40 matches for North Queensland.

The Hughenden product made his State of Origin debut this year and helped the Maroons to a second straight series win over New South Wales.

“Juz-e to be fair probably got off to a rocky start with us,” Green said.

“He’s really knuckled down, worked hard and improved his game, and topped off this year by being selected in the State of Origin team, so I’m really pleased for him. He’s worked hard for everything he’s got.”

Back-rower Lowe, also 25, has been in the Cowboys’ top-flight squad since 2013 and has rapidly progressed each year, with 2015 being his breakout season in which he nailed down a regular starting spot, playing in all 28 games en route to that historic premiership.

His improvement was this year rewarded with an 18th man spot in Game II of this year’s Origin series, with Green paying tribute to the path taken to the NRL by the Goondiwindi local.

“Lowey, he’s developing along nicely. He’s been in our system for quite a while. He has come through our Intrust Super Cup club, the Northern Pride,” he said.

The third-year Cowboys mentor said retention of its core group of players was central to the club’s selection philosophy.

“We believe that’s where our advantage lies at the moment. We’re really heavily focused on trying to retain as many of our squad as we can,” Green said.