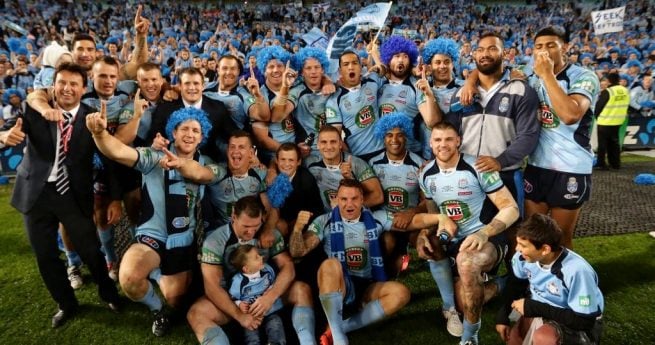 A late-firing New South Wales outfit has done enough to break Queensland’s eight-year hold on the State of Origin trophy, clawing out a 6-4 victory in front of 83,421 fans.

The image of the night was an ecstatic Jarryd Hayne running the ball into the crowd as the final siren sounded, then appearing in floods of tears in a post-match interview on the field.

NSW were below par throughout a night that saw plenty of penalties, dropped ball, niggle and scuffle, and rarely looked like clicking as a determined Queensland looked like sending the series to a decider on the back of two penalty goals – but a late momentum shift saw halfback Trent Hodkinson earn a try with 10 minutes to go.

It set up a grandstand finish with the Blues scrambling hard to protect their two-point lead and end Queensland’s eight-year run.

A fascinating and feisty opening half saw some crunching hits, with the kickers in particular wearing some big shots, and some slow play the balls as a stack of niggle was allowed to pass by the officials.

Robbie Farah made Daly Cherry-Evans a personal target, Josh Reynolds nailed Johnathan Thurston and Ben Te’o lined up Trent Hodkinson, and a series of scuffles – all pushes and no punches – broke out throughout the opening stages.

There was one sneaky jab from Nate Myles on James Tamou not deemed worthy of further action by the on-field officials, although a cheeky slap from Thurston on Beau Scott earned the home side a relieving penalty.

The niggle resulted in a fair few penalties, which flowed mainly to the home side to the tune of 6-3 in the half, but throughout it all Queensland just seemed to have slightly the better of the mid-field arm wrestle.

Two of those penalties to Queensland were awarded in front of the Blues’ posts, leading to a 4-0 scoreline in favour of the Maroons as Thurston’s brace of penalty goals took him to 162 points and past his coach Mal Meninga on the all-time Origin point-scoring tally, in his 29th consecutive Origin appearance.

There was some early traffic directed at the Blues’ new right-edge combination of Josh Dugan and Will Hopoate but aside from one miss from Dugan on Greg Inglis the pair passed their early examinations with no major scares. Origin I Man of the Match Jarryd Hayne was also kept quiet throughout as Queensland made sure to number up on the danger man in defence.

The best chance either side had for a try was right before half time when Thurston sent Justin Hodges – whose running game was a constant threat – through half a gap before Hayne brought him down. Cherry-Evans then grubbered for himself and looked likely to score before Reynolds booted the ball dead, with NSW only having to absorb a handful of tackles before half time.

The Maroons started the second half far more energetically, offloading at will, repeatedly spreading the ball wide and pushing through a tired-looking Blues outfit which were carrying an injured Hopoate out on the wing, his right arm hanging limply at his side.

The Blues also came up with some key errors, Scott losing it with his side on the attack and Reynolds throwing a pass to ground inside his own half.

It almost led to a try to Sam Thaiday, who was badly missed by the Maroons in Game I. From a standing start about 10 metres out he ran a jagged line through some ragged NSW defence and only a remarkable effort from Jarryd Hayne to slap the ball free at the last second kept the Blues in the game.

Queensland had some injury dramas of their own when winger Brent Tate, who has had to endure a horrific run of injuries throughout his career, left the field with a leg injury in the 56th minute. It meant back-rower Chris McQueen was forced onto the wing, where he dropped a ball during a dangerous-looking right side shift from the Maroons that threatened to earn the first try of the match in the 60th minute.

This came after they lost prop Matt Scott for the game after around 25 minutes with a fractured cheekbone.

The tide finally started to turn the Blues’ way after a few errors from the Maroons late in the piece, and it was a loose pass from Dave Taylor that gave the Blues their first real attacking chance with about 15 minutes left.

The Blues managed to force repeat set after repeat set, one from a penalty, one from Queensland knocking the ball down, and one from a drop out forced by Reynolds on a recovery from a poor pass.

The pressure finally told in the 71st minute when Hodkinson, criticised for not running the ball enough in Game I, dummied and ran through the line to become the game’s first try scorer, converting his own four-pointer to put the Blues up for the first time in the game.

Controversy then followed as the Queensland kick-off went out on the full, and although the ball looked to scrape the jersey of Aaron Woods on its way out the penalty to NSW stood and immediately put them on the attack as they suddenly found themselves in complete control.

The Blues threatened at the end of the set and although Queensland ended up with the ball a Hodges error soon after put the Blues back on the attack, but a negative set failed to press the advantage with three minutes remaining.

A half break from Inglis and a desperate offload threatened to take the game back but the visitors lost possession when Slater couldn’t pick up the pass. A vigorous Thurston forearm on Reynolds meant tempers flared once again and every man on the field ended up in another push and shove in the middle. Reynolds found himself on report for a suspected head-butt but the initial penalty stood against Thurston, who was also on report for a head-butt.

A threatening New South Wales set ended in a penalty to Queensland when Slater was held out of the action, meaning the Blues again had to withstand a desperate last play. But the right-side shift was shut down and when the kick downfield was marked by Hayne, he ran it all the way into the stands and into the arms of a rapturous Blue crowd as one of Australian sport’s most remarkable dynasties came to an end.