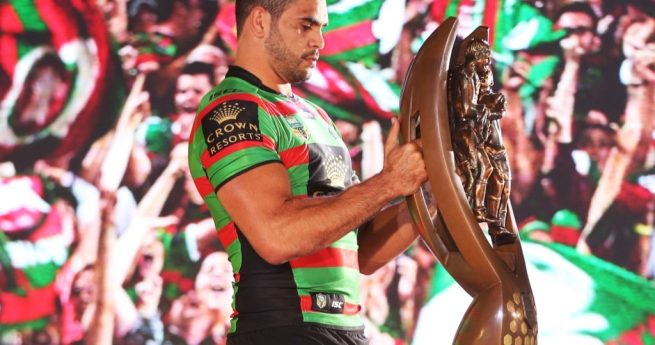 The NRL today kicked off the 2015 Telstra Premiership with a dynamic new advertising campaign.

Chief Executive Dave Smith joined players from the NRL clubs to launch the Premiership which begins next Thursday when the Brisbane Broncos play the reigning Premiers, South Sydney at Suncorp Stadium.

Mr Smith said the NRL was the most competitive and entertaining sports competition in the world – and that will be the theme of the advertising campaign.

Set to Robbie Williams’ hit track, Let Me Entertain You, the commercial takes members and supporters on a journey from the outback plains of Western Queensland to an inner city boot camp in Sydney.

The 2015 ad features more than 50 NRL club members and fans in a range of scenarios that include a rendition of the “Haka” on a Sydney train and a focus on  Greg Inglis’ trademark post try “Goanna” celebration.

The commercial includes highlights from every NRL club and reinforces the inclusive nature of the game.

Mr Smith said the NRL was focussed on engaging with as many supporters as possible, and providing the best and most exciting entertainment in the process.

“Last year we had 17 matches decided by just one point, and we did not know the makeup of the Finals until the very last game of the Premiership,” Mr Smith said.

“That’s how close our competition is.

“We’ve had the best pre-season on record – more than 100,000 fans have already attended the Nines, the All Stars and the World Club Series.

“The clubs have already signed 192,000 members for 2015 – nearly 10 per cent more than at the same time last year – and there is clearly an appetite for the entertaining product that our players produce every week.

“That puts us in a strong position heading into the Premiership.

“We have an amazing competition, and it is only going to get better in 2015.”

“This campaign celebrates the captivating nature of the Telstra Premiership and the different ways our fans are included in the experience,” Mr Pullen said.

“As the campaign highlights, the Telstra Premiership brings people together like few other sporting competitions in the world, from barefoot touch football right through to the elite level.

“With more themed rounds, blockbuster fixtures and our ANZAC Day tribute, the stage is set for one of the biggest Telstra Premiership seasons on record.”