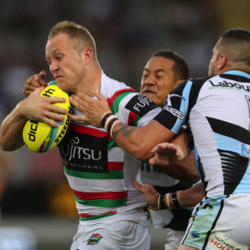 A new rule will be introduced for the Dick Smith NRL Auckland Nines, giving teams a “free play” advantage when the opposing team makes a mistake.

The rule is aimed at allowing the team which gains possession from a mistake to attempt a high risk play without fear of losing advantage.

Under the rule, the referee will call “zero tackle” when a team gains possession from a knock on, forward pass or accidental offside.

That will signal a “free play” which will enable the team which gains possession to have an extended advantage. This means they will retain the ball even if they make a mistake.

The advantage will only be complete if the team scores, if a player commits foul play or a player with the ball is tackled. If the ball is dropped or lost before the next play the ball, the referee will order a play the ball at the point of the original infringement.

NRL general manager of football Nathan McGuirk said the rule changed was designed to encourage exciting and high risk play at the Nines.

“The Nines is already one of the most entertaining events on the Rugby League calendar,” Mr McGuirk said.

“But this rule change will encourage teams gaining possession from a mistake to take a risk because they know they will still retain the ball even if they make a mistake.”

In the only major rule change for the Waitangi Weekend spectacular, the NRL has confirmed a “Free Play – Advantage” rule will be in effect during the 2016 tournament.

“It gives a team a fantastic opportunity to come up with creative plays; it’s a whole new opportunity from which they can attack with little risk of losing the advantage after an error.” Mr McGuirk said.

The rule also means teams can kick the ball on a turnover play and will get it back if the team that committed the error recovers it, and they will also get possession back following a tap down or strip.

“We are hoping to see teams take advantage of this rule with some amazing, opportunistic plays, which we think will result in more points and more great tries scored for the fans,” Mr McGuirk said.

The Dick Smith NRL Auckland Nines will feature all 16 NRL teams playing at Eden Park on February 6 and 7 2016.