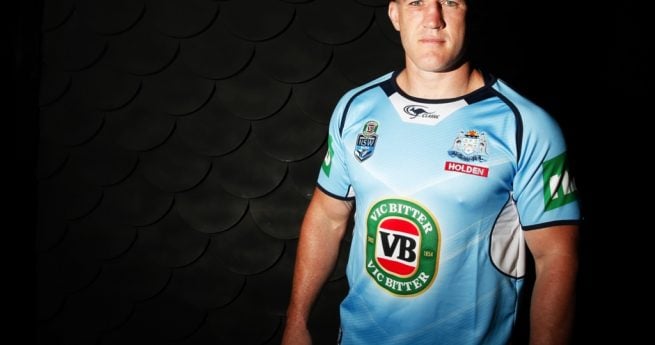 NSW VB Blues coach Laurie Daley and captain Paul Gallen today gave their support to a new-look 2016 NSW State of Origin jersey at the home of the Blues, The Star.

The new playing strip, incorporating the (v-shaped) “chevrons” that have become synonymous with rugby league, will run down the front and back of the jersey and on the side panel of the playing shorts. The jersey will also feature a white side panel, while keeping in line with the traditional sky blue.

In addition to supporting the Blatchys Blues in 2015, major partner The Star will feature as the back of jersey sponsor for the next two years, extending their commitment to the VB Blues.

“It’s fantastic to see The Star come on board as the back-of-jersey sponsor. The Star was a great supporter of the VB Blues and the Blatchys Blues in 2015 and it’s great to see them extend their commitment with the NSW side.”

VB Blues captain Gallen said: “I think the jersey looks outstanding. It has a modern look with the chevrons down the middle and it also has the tradition of the sky blue colour.”

The Star’s Managing Director, Greg Hawkins, believes the newest partnership will be valuable for both The Star and the VB Blues.

“The Star is proud to be home of the NSW Blues and we’re excited to be represented on the new jersey which marks a new era for the team,” Hawkins said.

“We look forward to continuing to engage with the massive support base that shows such pride and passion in this team.

“For us, supporting the fans is a continued commitment and key to what we want to achieve as an organisation – that is, deliver thrilling experiences for our guests.”

Tickets for the two Sydney games – Origin I and Origin III – which will be held at ANZ Stadium on 1 June 1 and 13 July, 2016, can be purchased here.