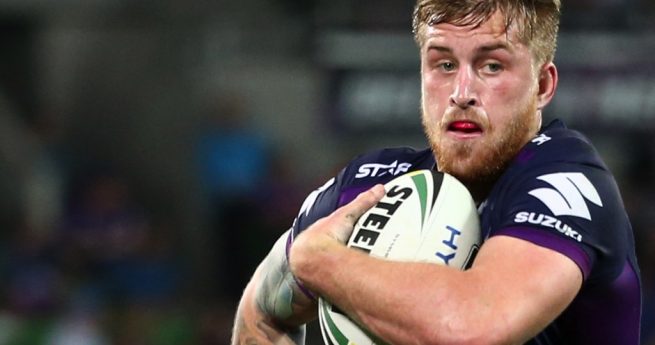 Melbourne Storm has agreed to terms on a contract extension with rising star Cameron Munster.

Munster’s new deal will see him remain in Melbourne until at least the end of 2019.

Media opportunity: Cameron Munster will be available to media today, Wednesday 11 May, at 9.30am at AAMI Park.

The 21-year-old has played 28 games since making his debut in 2014 and has emerged as one of the NRL’s most exciting young talents.

After claiming the Club’s Best Back and Rookie of the Year honours last year, Munster has continued his rapid rise in 2016, ranking third in the NRL for total metres.

He said a love for the Club and the city played a key factor in his decision to play on in purple.

“It’s really good to sign for another two years. I decided to stay here because Melbourne gave me my first opportunity,” Munster said.

“They have done a lot for me and my improvement in my game and also it is a great city to live in.”

The Rockhampton-native arrived at Storm in 2013 after a breakout season as a teenager in the Queensland Cup.

Since then has looked to develop his game at every opportunity under the guidance of the Club’s coaching staff and experienced leaders.

“It is fantastic to have Cameron continuing to his career in Melbourne,” Storm Football Director Frank Ponissi said.

“It is an exciting step forward for the Club and fantastic for Storm fans that we will have a player of Cameron’s calibre playing in a Storm jersey to at least the end of 2019.

“We look forward to continue to help Cameron develop his game and reach his full potential with Melbourne Storm.”

Munster has played all nine games this season for Storm, scoring three tries and averaging 169 metres per game.

His signing comes on the back of Tim Glasby and Christian Welch also signing extensions with Storm.

Photo: Cameron Munsters in action for Melbourne against the Titans in Round 2 of the 2016 NRL season. (nrlphotos.com)