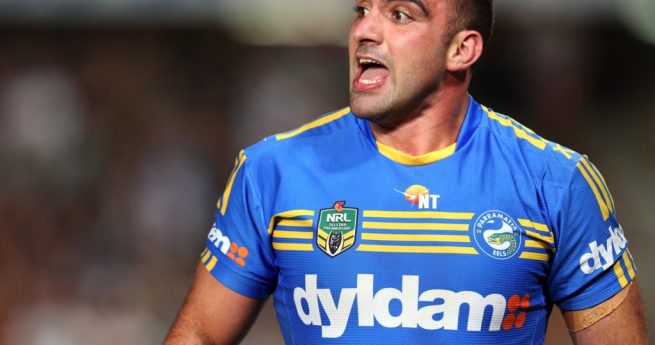 Tim Mannah and Kieran Foran will Captain the Dyldam Parramatta Eels in 2016.

Head Coach Brad Arthur announced the appointments at the Eels’ 2016 Season Launch on Wednesday morning to an audience including the Parramatta Board of Directors, Club Patrons, NRL and NSWRL officials, commercial partners, Parramatta Councillors and the NRL playing squad, and hosted by Eels ambassador, Andy Raymond.

“I came here with the intention of wanting to train hard and let my footy do the talking, to really buy into the culture that the boys have built here and what Brad was doing. I just wanted to take it day by day and really get my body in the best shape possible through the pre-season.

“At first I was a little hesitant, of course, because I am a big admirer of Timmy Mannah. I think he has done a tremendous job over the years since taking over from Nathan Hindmarsh and he is such a respected bloke.

“But Timmy and I had a chat and spoke to one another and we are just excited to be able to do it together. Neither one of us is more dominant than the other.”

For 28-year-old Mannah, the opportunity to work with Foran as a fellow Captain was a welcome one.

“Kieran is a smart, 80-minute player, and definitely a player that will lead with his actions,” Mannah said.

“It’s good to have him there calling the shots on the field, and I will be relieving him with pressure off the field as Club Captain.”

As the season opener approaches for the Eels, Arthur said the decision on his final 17 players to take the field in Round One is ‘close’, but not yet set in stone.

“I think I’m going to be faced with my most difficult decision in my time as Parramatta coach,” Arthur said of the choice ahead for him in his starting side.

“We’re at the time of the year now where the players are getting a bit cranky cause they’re had enough of pre-season training and just want to get out there and play, and you’re just excited to see them get out there and start the season.”

Following the club’s final trial game against the Penrith Panthers on February 21, the Dyldam Parramatta Eels will kick off the 2016 season against the Brisbane Broncos on Thursday, March 3, at home at Pirtek Stadium in Parramatta.

Keep up to date with the Eels news on their website.

Solid audience for All Stars