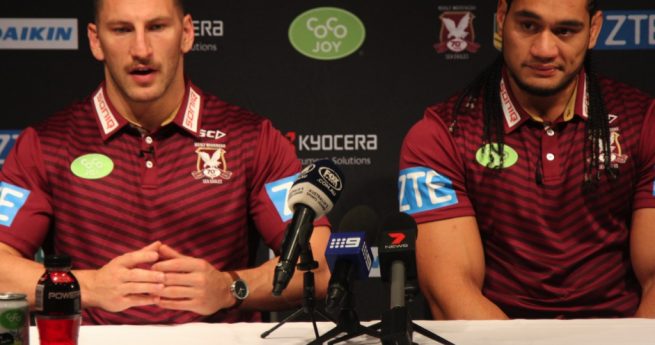 Both players proudly pulled on the Sea Eagles colours for the first time shortly after arriving at Sydney International Airport following the Kiwis tour of England.

The recruitment of Taupau on a four-year deal was touted as one of the Club’s biggest signings since two time premiership winning forward Malcolm Reilly.

“Martin’s signing made everyone sit up and take notice that we are hell bent on succeeding. He is going to be a huge part of that,’’ Barrett said.

“He is a powerful ball runner who creates opportunities for the players around him. I’m sure he’ll form deadly combinations with the likes of Brett Stewart and Daly Cherry-Evans.

“His professionalism with his training is first class and his experience is going to be of enormous benefit to our young forwards like Jake Trbojevic and Liam Knight.

“I also think we can also help Martin Taupau. He is a little bit untapped in where he is at the moment. He is a terrific athlete and only 25.”

Barrett said the decision to reunite with Brown at the Sea Eagles was due to his leadership and no-nonsense approach.

“Lewis is a great Clubman who does things with little fuss,’’ Barrett added.

“He looks after himself in terms of preparation and was the type of player and person that I wanted here.

“With the reduction in the interchange from 10 to eight, his versatility is a big plus. He can play in the back-row, hooker and at centre. His experience will be invaluable.”