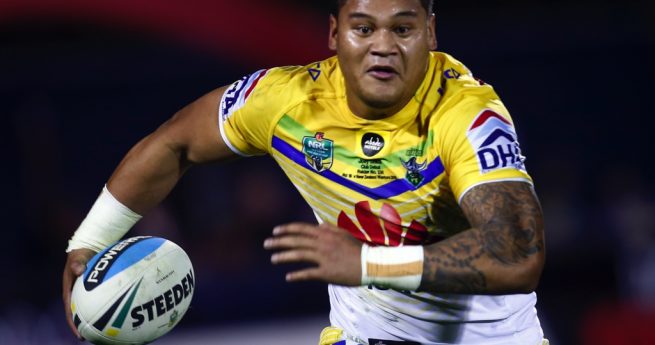 Joey Leilua has signed a new three year deal with the Canberra Raiders.

He joined the Raiders mid-season in 2015 from the Newcastle Knights and played six matches for the Raiders and he’ll be looking to cement a place in the NRL team in season 2016 and beyond.

Leilua said he’s looking forward to getting himself fit and ready ahead of the new season and he was working hard to make sure he could get himself back into the form which saw him on the verge of NSW Origin selection.

“Ricky’s given me an opportunity to come to the club and get my career going in the right direction, so I need to work hard and earn my place,” Leilua said. “It’s going to be a hard pre-season, but I know if I put the effort in I’ll be able to start the season well.”

Still just 23, Leilua said the new deal will allow him to mature as a player and hopefully return him to the form which almost saw him make his Origin debut in 2012.

“I’ve got my goals of what I want to achieve but I like to keep them personal,” he said. “I know if I train hard and prepare well for the season I’ll be able to make an impact for the Raiders which is what I need to do.”

Raiders CEO Don Furner said Leilua is another key re-signing for the club and he’s another player who the club expected to continue improving over the next three seasons.

“Joey’s a very talented player who we know will continue to develop with us if he keeps up a strong work ethic,” Furner said. “We see him as a part of our plans over the next three seasons and if he reaches his full potential he could become one of our most dangerous attacking players.”