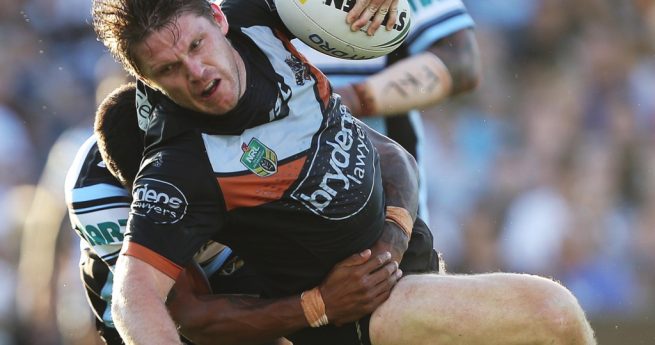 Wests Tigers vice-captain Chris Lawrence has today agreed to terms with the Club for a further three years.

The 27-year-old has played 175 NRL games for Wests Tigers since making his debut in 2006 and has crossed for 72 tries – the second most in the history of the Club.

Lawrence has made a total of six Test appearances for Australia in 2010 and 2011, represented City Origin on three occasions (including captaining the side this year) and played three games for the Prime Minister’s XIII.

The Eaglevale St Andrews junior was named vice-captain, along with Dene Halatau, in December last year and is also one of the Club’s ambassadors for beyondblue.

Lawrence expressed his excitement to extend his time with Wests Tigers as he strives to become a one-club player.

“It’s very exciting to re-sign with the Club for the next three years,” Lawrence said. “I’m really pleased to be able to stay at Wests Tigers and hopefully I can become a one-Club player.

“It’s a really good group of players here at Wests Tigers, we are tight bunch of guys and all get on with each other really well, so I’m looking forward to continuing that over the next few years.

“I’ve really enjoyed the vice-captaincy role this year, I definitely see myself as a leader in this group as it’s a pretty young squad.

“On an individual level, this is my first year as a full-time back rower, so I really want to grow and develop my game in that position – hopefully I can keep improving with each game I play there.

“From a team perspective, I want to get Wests Tigers back into the top eight, and the top four, because that’s where we should be,” he said.

Wests Tigers CEO Justin Pascoe said that Lawrence is an excellent ambassador of the Club’s values both on and off the field.

“Chris is an excellent ambassador for the Wests Tigers’ brand,” Pascoe said. “He is a very hard-working individual, both on and off the field, so we are very pleased to have him commit to the Club for three more seasons.

“Chris is a great leader amongst the playing group and is very active in the Wests Tigers’ community, including the important role he plays as one of the Club’s beyondblue ambassadors,” he said.

Head Coach Jason Taylor echoed the praise for Lawrence, highlighting the important role he plays in the side.

“Chris is an absolute pleasure to have at the Club,” Taylor said. “He’s an out and out professional who turns up every day and prepares himself in the absolute best possible way.

“He sets a great example for the younger players at the Club and we are very happy and excited about the future with Chris continuing to be one of our leaders.

“The thing with Chris is that he puts his body on the line every single week and plays with every ounce of energy that he has.

“His move to the backrow has been a really positive one, he has enjoyed it, and he is actually getting better as time goes on when it comes to knowing that role,” he said.

Photo: Chris Lawrence’s new deal will keep him at Wests Tigers through until the end of the 2019 season. (nrlphotos.com)

Chee Kam adds another year to...