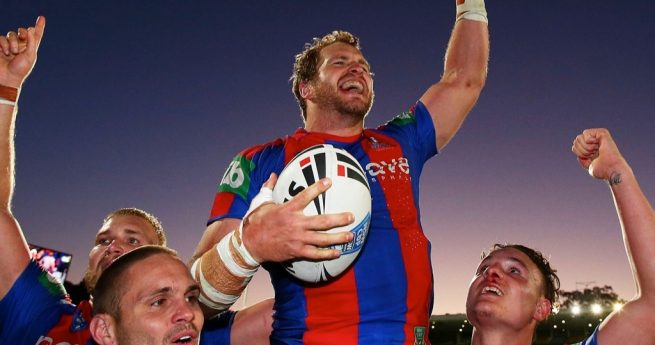 The Knights stormed from seventh place to book their return to the premiership decider and upset Grand Final favourites Wyong Roos 20-10.

Kerrod Holland and Honeti Tuha had an explosive impact on their left side of the field, scoring four tries between them and making it tough for Roos’ defenders Brendan Elliot and Nathan Smith.

Tuha received man of the match honors for his hat-trick heroics, in a match that had a lot of feeling in it early on – with Jake Mamo and Jono Ford being sin-binned early for their involvement in a mid-field scuffle.

The script was written perfectly for retiring veteran Clint Newton, who will captain his side one more time in the NRL State Championship against the Ipswich Jets next Sunday.

Newton says he and the Knights will concentrate on Ipswich later in the week, but he is looking no further ahead than bringing the VB NSW Cup trophy to Newcastle.

“I think the amount of resolve these blokes have shown, I can’t say enough how much I’m proud of them. They’ve been fantastic and this will be one that I remember for a very long time,” said Newton.

“[Ipswich] are a great footy side, we’ll worry about them through the week. I’ve got a lot of respect for the Walker brothers as coaches, so we’ll just enjoy this and bring the trophy back to Newcastle – we can’t wait. I’m just so proud of these blokes.”