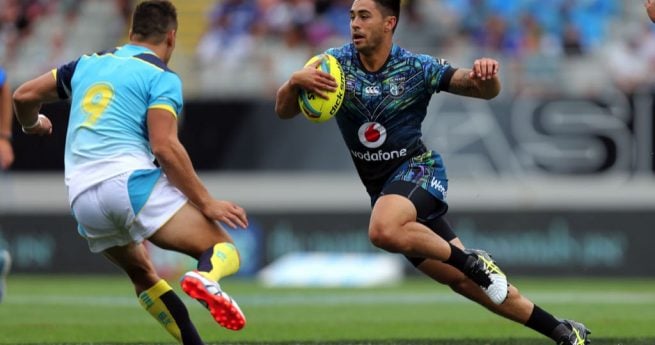 Vodafone Warriors halfback Shaun Johnson has been confirmed to make his comeback from injury alongside a host of seasoned first graders at the 2016 Downer NRL Auckland Nines at Eden Park on February 6-7.

The 25-year-old Johnson will again lead the Vodafone Warriors in what will be his third consecutive appearance at the season-opening tournament.

“We’re naturally excited we’ve been able to pick Shaun and he’s certainly excited about having the chance to come back from his ankle surgery at the Nines,” said Vodafone Warriors head coach Andrew McFadden.

“He had to be confident and he is. He really looks forward to playing in this tournament and we couldn’t be happier to have him ready to go and to be our captain again.”

Four of the club’s 2016 signings have been selected to make their Vodafone Warriors debuts at Eden Park – Kiwi fullback Roger Tuivasa-Sheck, former Sharks Blake Ayshford and Jeff Robson and Queensland Cup recruit Henare Wells, previously an NYC team-mate of Tuivasa-Sheck’s at the Roosters. Ayshford will be making his third straight Nines appearance, Tuivasa-Sheck will have his second outing and Robson and Wells their first.

“Everyone knows what Roger can do while Henare has out and out pace,” said McFadden.

“Blake was in the Cronulla side that made it to the final last year and he was also named in the team of the tournament while Jeff is going to be valuable with his direction.”

Three of the club’s most experienced forwards have been chosen in props Jacob Lillyman and Ben Matulino plus second rower Ryan Hoffman while there’s also front row support from 2015 NRL rookies Albert Vete and Sam Lisone as well as Charlie Gubb.

Lillyman and Vete will be playing in the Nines for the first time, Lisone and Matulino are back from last year’s squad, Gubb returns after being involved in the 2014 event and Hoffman is appearing for the third straight time.

”The boys in the middle are really important. We need forwards who can give us some minutes and this group of players offer that,” said McFadden.

Explosive ball runners Solomone Kata and Tuimoala Lolohea have been named for the third year on end while Konrad Hurrell and David Fusitu’a both return after featuring in 2014 but missing the event last year.

Outside back Ken Maumalo, impressive in his debut appearance last year, is retained while the experienced Jonathan Wright has sealed a place this year after suspension ruled him out last season; he was in Cronulla’s line-up at Eden Park in 2014.

Apart from Taumarunui-born Wells, Vete, Lillyman and Robson, the only other player set to make his Nines debut is 18-year-old playmaker Ata Hingano, who won the club’s TNT NYC Rookie of the Year accolade last year.

“It’s an exciting team looking at the players we’ve been able to select,” said McFadden.

“We’re confident we have a group of players here who are going to put on a good show at Eden Park next weekend.

“For us the Nines is about having some fun while the real focus is obviously on the NRL season to come.”

The Vodafone Warriors have been drawn in the Hunua Pool with Canterbury-Bankstown, Manly and Brisbane. They start their campaign against the Bulldogs at 2.20pm on the first day (February 6) and face the Sea Eagles at 6.15pm. Their final pool game against the Broncos is scheduled for 12.40pm on the second day (February 7). The top two teams from each pool advance to the quarter-finals.

Visit the Warriors website for all the team news.

Moylan to skipper Panthers in...