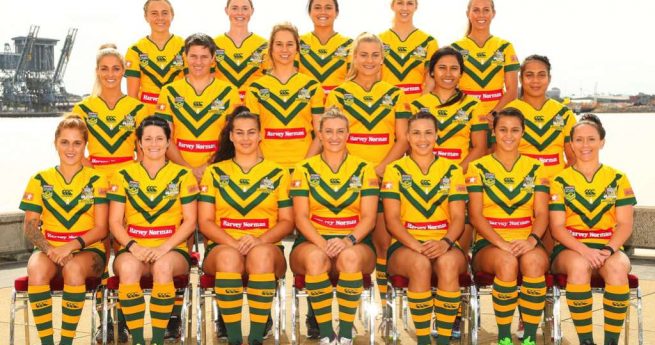 The Harvey Norman Jillaroos have named a side balanced with youth and experience for their clash against the Ferns on Friday 6 May as part of the double header with the Kangaroos and Kiwis.

Five Test debutants come into the squad, whilst seasoned Jillaroo Ruan Sims will run out as captain for the first time as she competes in her sixth Test Match.

“We know the job ahead of us and the team chosen has a blend of new faces, ready to take up the challenge that Test Match football brings, as well as players that have been there before and know how much it means to wear the green and gold jersey for Australia,” said Folkes.

In her debut as captain, Ruan Sims said it was a privilege to lead the team and the side was focused on the task ahead.

“I have grown up in a Rugby League family, with my brothers and I all playing the game we love,” said Sims.

“For me to reach the pinnacle and to have the opportunity to captain the Jillaroos is a tremendous honour and a moment that I will cherish for the rest of my life.”

The Jillaroos will kick off against the Ferns at 5:20pm at Hunter Stadium on Friday, before another blockbuster clash between the Kangaroos and Kiwis.

Tickets for the double header Test Match are available from just $35 for a single pass and less than $100 for a family pass to witness both the Jillaroos and Kangaroos take on the Ferns and Kiwis.

Tickets can be purchased at www.nrl.com/tickets

The Nine Network will broadcast the match and fans that cannot make it to the match live are encouraged to check their local television guides for kick off time.

The match will also be live streamed on the NRL Digital Pass and fans can sign up at telstra.com/footypass

Photo: The Jillaroos side for the 2016 Test against the Kiwi Ferns (nrlphotos.com)