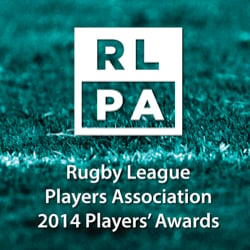 A host of Rugby League champions are in line for the coveted RLPA Players’ Player Medal to be presented next week at the 2014 Rugby League Players’ Association Players’ Awards.

It’s the eleventh year of the Awards that will be announced on Tuesday 16 September at the Four Seasons Sydney Hotel.

Johnathan Thurston, who claimed the accolade in 2005 and 2013, is in line for a third peer voted award along with 2009 Medalist Jarryd Hayne. Joining the duo as finalists for the RLPA Players’ Player Medal are Anthony Milford, who last year was a nominee for the RLPA Rookie Award, Jesse Bromwich and Gareth Widdop.

“The RLPA Players’ Player Medal is the ultimate recognition by your peers of your on-field performances,” said RLPA CEO, David Garnsey. “To receive this accolade is certainly a career highlight for a professional Rugby League Player.”

Players vote for their opponents on a 3-2-1 basis after each game of the NRL regular season and the votes are tallied after Round 26.

“The night is also an opportunity for us to celebrate career milestones and achievements at Youth, Premiership and Representative levels of the game,” said Garnsey.

The One Solutions Representative Player of the Year Awards honour the contribution made by Players to their national teams during the World Cup (2013), State of Origin and Test Matches with nominees in the Australia, New Zealand and Rest of the World categories.

Luke Brooks has graduated from his nomination last year in the National Youth Competition (NYC) category to be a finalist in the RLPA Rookie of the Year category as are Paul Carter and Pauli Pauli while Nene McDonald, Jake Mamo and Sione Mata’utia will vie for the NYC Player of the Year crown.

“All those nominated can feel justifiably proud of their performances throughout what has been one of the most closely contested seasons in recent memory,” said Garnsey.  “We look forward to celebrating their achievements.”

Below is the list of finalists for the 2014 RLPA Players’ Awards:

RLPA Rookie of the Year

One Solutions Australian Representative Player of the Year

One Solutions New Zealand Representative Player of the Year

One Solutions Rest of the World Representative Player of the Year

Awards will also be presented in Education and Trade categories for both NYC and NRL Players while eleven Kangaroo and Kiwi Players will receive the RLPA Chairman’s Award to mark their Representative debuts for Australia and New Zealand respectively.

The prestigious RLPA Dennis Tutty Award will be presented to a player who has demonstrated the same qualities of commitment and determination as Dennis Tutty to champion and defend the rights of Rugby League Players.

Holden Cup Team of the Year