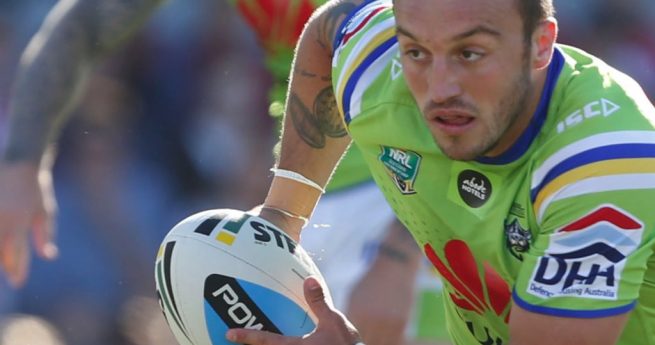 Canberra Raiders hooker Josh Hodgson will remain with the club until the end of the 2018 season, after signing a two year contract extension.

Hodgson originally signed with the club for the 2015 and 2016 seasons, but has extended his current contract by a further two years, with the club identifying him as a key component of the Raiders squad in the future.

Hodgson said the decision was an easy one for him to make and said he’s made Canberra a place he can call home.

“It’s great to get something sorted for the next few years. It will take me to the end of 2018, which is great for me and great for my family,” Hodgson said. “The club was eager for me to stay and I was eager to stay as well because I love it here in Canberra. As I have always said I’ve found a real home away from home here. It’s great to get something sorted and get it locked in.

Hodgson said the attitude of the playing group was something which swayed his decision to re-sign and said he believed the future was bright for the Raiders.

“When I first came here there wasn’t as much belief that we could make a real go at things. It has really turned around now and the feeling about the place is really good,” he said. “I’m thankful we have a good team here, good coaches and a great setup. I think there’s some exciting things to come in the next few of years, and I’m massively excited to be a part of that.”

Canberra Raiders CEO Don Furner said the club was thrilled to have Hodgson remain with the club and said he’d exceeded expectations since arriving in Canberra.

“We had high hopes for Josh when we recruited him from the English Super League at the beginning of last year and he has delivered over and above in terms of what he brings to the club both on and off the field,” Furner said. “We see Josh as one of the clubs most important players as we continue to bring stability to the NRL squad and to have him sign with us until the end of 2018 helps us build a squad which we believe will be successful.”

See the full Interview with Hodgson on the Raiders website.