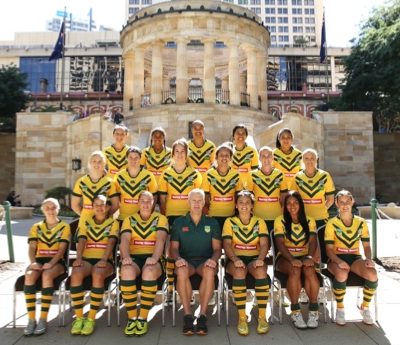 The deal comes as the Jillaroos are in Brisbane preparing for their 2015 ANZAC Test curtain raiser against the Kiwi Ferns at Suncorp Stadium on Friday night.

NRL Chief Operating Officer Suzanne Young said the announcement was fantastic news for the future development of the women’s game.

“Securing a naming rights sponsor for the first time is another sign the women’s game is gaining significant recognition and momentum,” she said.

“Women’s Rugby League is an important asset and further support from Harvey Norman will provide many opportunities to continue to strengthen the professionalism of the women’s game.

“This announcement further cements the relationship established between the NRL and Harvey Norman and the commitment to growing the game of Women’s Rugby League.”

Four new players will pull on the green and gold for the first time on Saturday, Indigenous All Stars Mahalia Murphy, Tallisha Harden, Latoya Billy and Casey Karklis.

The Jillaroos are looking to seek revenge after going down 2 -1 in a three match series against the Kiwi Ferns in their last encounter at the Auckland Nines earlier this year,  as well as the 2014 Four Nations Test match curtain raiser in Wollongong last November.