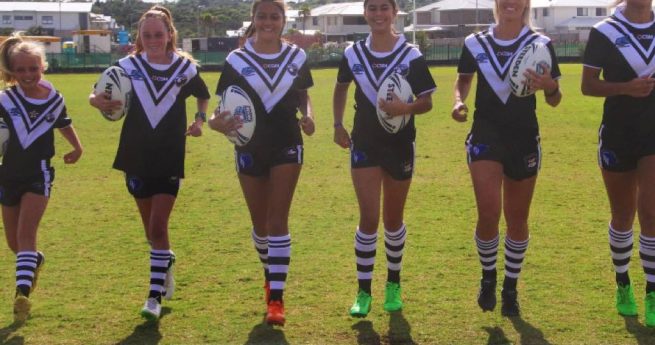 New South Wales Rugby League has launched a genuine pathway for girls and women wanting to play Rugby League from juniors to state and national level in the state.

Previously, girls have been allowed to play (alongside boys) in Junior League (6-12 years), but not until they are 17-years-old are they given the opportunity to play Rugby League (in the open women’s competition), meaning unless Rugby League is offered at school, girls aged 13-16 had no opportunity to play the game – and certainly not as a weekend pursuit.

The introduction of the girls divisions to the Sydney Combined Competition means that pathway is no longer broken, giving girls the opportunity to play through all age groups on their way to representing New South Wales in the Interstate Women’s clash and the Jillaroos at national level.

In the Sydney Metropolitan Women’s competition, three NSW and Jillaroos representatives Sam Hammond, Allana Ferguson and Corban McGregor will lead out Cronulla-Caringbah (one of three new teams) in their first match against Berkeley Vale Panthers today.

NSWRL Performance and Programs Manager Jamie Feeney is excited about the development of the pathway and the opportunities it creates for women in Rugby League.

“It’s fantastic for the women in our game to have the same opportunity as our males always have,” Feeney said.

“To be able to start playing as a young girl and have the chance to follow a pathway through to represent NSW and the Jillaroos is great for Women’s Rugby League.”