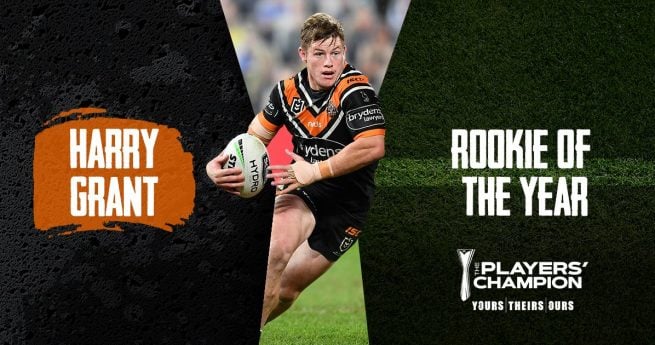 After a stellar season with Wests Tigers, young gun Harry Grant has been voted the RLPA Rookie of the Year for 2020.

The Yeppoon Seagulls junior joined the Wests Tigers in Round 3 from the Melbourne Storm, enjoying a breakout season in which he scored three tries in 15 appearances.

Grant was voted the best rookie by his fellow players – ahead of fellow finalists Toby Rudolf, Eli Katoa, Herbie Farnworth and Hamiso Tabuai-Fidow.

The Rockhampton-born dummy-half also earned a place in the Queensland Maroons train-on squad for the upcoming Origin series and was awarded Wests Tigers’ Rookie of the Year at their Kelly-Barnes Awards Night.

Grant was presented the trophy on Friday at the Maroons’ training session by RLPA Board Member Daly Cherry-Evans.

Cherry-Evans was also a previous recipient of the RLPA Rookie of the Year award in 2011.

Grant, who also won the RLPA National Youth Competition Player of the Year in 2017, played two NRL games for the Melbourne Storm prior to this season.

The Players’ Champion from the NRL and NRLW will be announced live on Nine’s Grand Final broadcast on October 25.