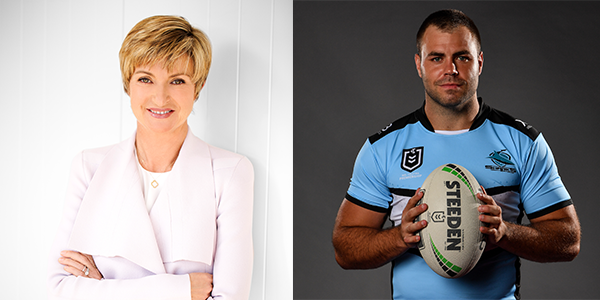 The Rugby League Players’ Association (RLPA) is pleased to announce the appointment of Wade Graham and Pippa Leary to its Board of Directors.

The pair were officially welcomed by RLPA Chair Dr Deidre Anderson and fellow directors at the most recent board meeting held on Wednesday, 15 May.

Both will continue their involvement with the RLPA, with Mr Graham emerging from the Player Advisory Group and Delegate pathways, while Ms Leary has served on the Advisory Board in recent years.

Mr Graham is the current co-captain of the Cronulla Sharks and has amassed 220 NRL appearances since his debut in 2008, combined with an exceptional representative career that includes matches for Australia, New South Wales, City Origin and the Indigenous All Stars.

Ms Leary is currently the Commercial Director of Digital Sales at the Nine Network and has a wealth of experience in the digital media industry, including previous senior executive roles at Fairfax Media and as the CEO of Fairfax-Nine programmatic exchange APEX.

Dr Anderson said both Mr Graham and Ms Leary will be welcome additions to RLPA Board, further strengthening the leadership and direction of the Association.

“Both Wade and Pippa are exceptional additions to the RLPA Board of Directors,” Dr Anderson said. “Having their knowledge and experience to assist with guiding the direction the Association will be of enormous benefit to our membership.

“The newly developed Game Plan marks the beginning of another important period for the RLPA, and with both Wade and Pippa joining the Board it will only strengthen the capacity of the organisation in ensuring our members are represented by a strong Association.

“Wade and Pippa are leaders within their respective industries, and I believe it speaks volumes about the direction of the RLPA when we have passionate and experienced individuals eager to be involved with the Association.”

“I’m really excited to be joining the RLPA Board of Directors,” Mr Graham said. “This is a great opportunity for me to be at the forefront of representing players, while also ensuring our partnership with the game continues to develop.

Ms Leary, an experienced board director with previous appointments with companies such as Solstice Media and Equip Super, said she looked forward to playing a more active role in the direction of the Association.

“Issues of player well-being, transition to retirement and cultural change have long been of interest to me during my time on the RLPA Advisory Board,” Ms Leary said.

“I hope that during my tenure on the RLPA Board I will be able to contribute further value to these discussions.

“I am also looking forward to taking a more active role in helping the RLPA and NRL create their joint commercial strategy, especially as it navigates a digital future.

“Past experience on the boards of financial institutions and media companies will also allow me to bring knowledge and guidance regarding governance and strategy formulation, as well as commercial operations insight to the RLPA Board.”

Additionally, Parramatta Eels forward Tim Mannah has stepped away from his position as an RLPA Director.

Mr Mannah joined the RLPA Board in 2010 and has made a significant contribution to the Association during that time.

The RLPA would like to thank Mr Mannah for the important role he has played during a growth period for the Association.