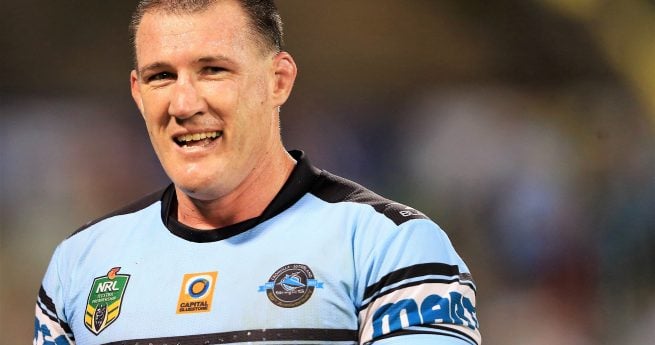 Cronulla-Sutherland Sharks skipper Paul Gallen will join the illustrious 300-game Club tomorrow night when his side travel to Suncorp Stadium to take on the Brisbane Broncos.

The former Australian and New South Wales representative will play alongside fellow 300-game players Luke Lewis and Chris Heighington in the Round 23 clash – with the Sharks becoming the first team in history to field three ‘300-game’ players in the same match.

Gallen will be the fifth player to reach this milestone in 2017 – with Lewis, Heighington, Storm halfback Cooper Cronk and Warriors forward Ryan Hoffman also achieving the feat earlier this year.

Gallen made his NRL debut for the Sharks in 2001 and has scored 60 tries in his 299 appearances.

The 35-year-old led the Club to its maiden premiership victory last year, with the Sharks defeating the Melbourne Storm 14-12.

The Rugby League Players Association would like to congratulate Gallen on joining an illustrious group of players in the 300-game Club.