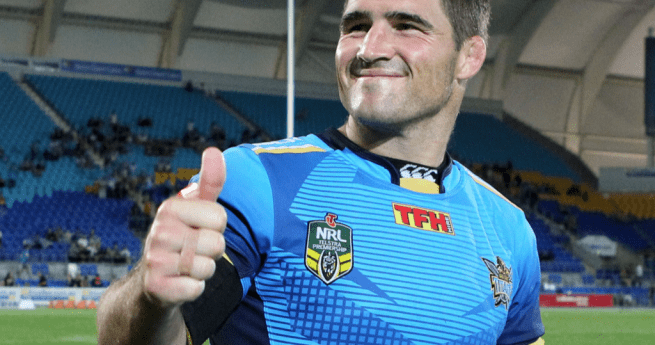 Aquis Gold Coast Titans hooker and co-captain Nathan Friend has announced he’ll call time on his 15-year NRL career at the end of the 2016 season.

The 35-year-old from Toowoomba has decided to retire after his one season back at the Gold Coast Titans where he was an inaugural player in 2007.

“I want to take this opportunity to announce my retirement, at the end of the 2016 season, from the game I’ve loved ever since my first encounter as a five-year-old,” the courageous little hooker said this morning.

“Thanks to everyone that has had a hand in my career. I’m forever grateful for the support and guidance I have received.

“It’s now time to give back to my beautiful wife Kellie who has sacrificed so much of her life to support me on my endeavours whilst producing two wonderful children.

“I look forward to the next chapter of parental duties on weekends and being around family and loved ones once again.”

Friend has played 235 NRL games since making his debut for Brisbane as one of the “Baby Broncos” of 2002 who created somewhat of a legend by beating the highly-fancied Wests Tigers despite being without nine State of Origin players and coach Wayne Bennett. The Broncos won 28-14 at Campbelltown.

Also in that team, coached on the night by Craig Bellamy, was Corey Parker, who will also retire at the end of the season.

That debut was Friend’s only NRL game for the Broncos and the next season he joined Melbourne Storm to play under Bellamy who was starting out as an NRL head coach. Injury saw Friend lose out to Cameron Smith for the first round hooking spot. He still played 34 games for the Storm, with the highlight being coming off the bench in the lost 2006 grand final against the Broncos.

He was the initial Titans hooker and played 100 games before heading across the Tasman to link up with the Warriors in 2012 before heading back to the Gold Coast this season where he has been a model mentor for many of the club’s young players.

“It’s been great to be able to see him come back and finish at the club where he was a foundation player and played 100 games previously,” he said.

“He has been a key component of rebuilding the club and a great example to every young player coming through by being a thorough professional in all that he does.

“He’s not a big man in a tough sport and the fact he has played 235 games at NRL level is a tribute to him, his preparation and leadership and we all know that will continue until the end of the season.”

Friend says he is determined to finish the season by leading the Titans to the finals, after being a key player in their only two previous finals campaigns in 2009-10.

“That would be great,” he said. “But there is a lot to be done before that might eventuate and I just want to work as hard as I can for the team and enjoy every moment I can until whenever my last game might be.”

O'Neill and Lowe play on...