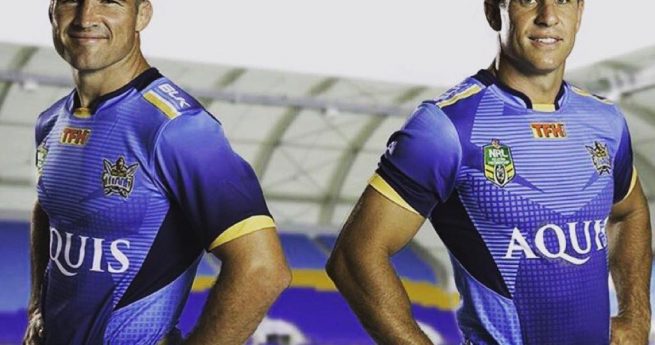 Returning foundation Titan Nathan Friend and fullback William Zillman have been named co-captains of the Aquis Gold Coast Titans for 2016.

The pair will lead a strong leadership group that will mentor a largely young and inexperienced side that begins its NRL campaign against Newcastle Knights at Cbus Super Stadium in round one.

“We’ve decided to go with a co-captaincy system and both are natural leaders with tremendous experience and respect within the squad,” said Head Coach Neil Henry.

“They are both ultimate professionals in every aspect and tough competitors.

“We are fortunate to have several senior players who are natural leaders like these two and David Shillington, Greg Bird, Zeb Taia who is new to the club, Luke Douglas and and others and they will give Nathan and Will great support.”

Friend, who played 100 games for the Titans from the inaugural season of 2007 to 2011, will be an NRL captain for the first time but is looking forward to the challenge.

“I’m just honoured to be held in such esteem by the club and to have the respect of my peers,” he said.

Asked what traits he wanted to emulate as a skipper, he said: “Good captains choose themselves.

“I’ve played under someone who I rate highly in Simon Mannering (at the Warriors); he doesn’t say much but when he speaks guys listen, he’s a leader.”

Zillman has been vice-captain for the past three seasons and has been with the Titans since 2009, having led the side seven times since 2012, and has played 132 of his 156 NRL games for the Titans.

After playing the first 10 games last season before being sidelined with a back injury that has been rectified through surgery, he’s determined to be a major, consistent, performer.

“My goal is to get back to the form I know I’m capable of and to play consistent football and play 24 rounds,” Zillman said.

“That’s something I want to do for not just myself but the team. I’ve been in full training for two months now and looking forward to the first trial, and just getting out there.

“You have different leaders on the field; some talk a lot and some show their leadership with their actions. Friendy is one of those guys [who lead by actions] and hopefully I can be too.”

For more on the Titans head to their website.

Mannah and Foran to captain