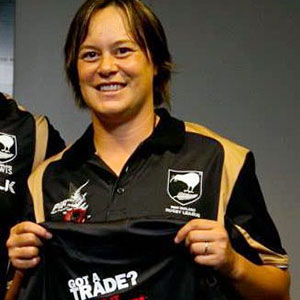 New Zealand Rugby League and the NZ Kiwi Ferns are excited to welcome Got A Trade? Got It Made! as a sponsor of the women’s international programme.

Their message of choosing wise career options will feature on the back of the Kiwi Ferns jerseys, when they face the Australian Jillaroos in the Anzac Test curtainraiser at Brisbane’s Suncorp Stadium tonight.

Got A Trade? Got It Made! has also been instrumental in securing live TV coverage of the game, which pits the world’s best women’s rugby league teams against each other for the third time in six months.

New Zealand toppled the reigning World Cup holders at Wollongong last November and then headed them again in a three-game series over the shortened version of the game at the NRL Auckland Nines.

Got A Trade? Got It Made! is already a staunch supporter of NZRL through its naming rights sponsorship of the 2014 and 2015 national youth tournaments and its career advice to the youth elite programme.

“It’s a natural step to extend this support to our Kiwi Ferns for this week’s Anzac Test game,” says Got A Trade? Got It Made! chair Rachel Hopkins.

“Mothers, sisters, aunties, grandmothers and nieces all play an important role in influencing career decisions of young people, so the ‘Got a Trade’ team are really proud to be supporting the Kiwi Ferns in their clash with the Australian Jillaroos.

“Not only are our trades crying out for more young people to join them, we need more women involved in trades too.”

For NZ Rugby League, this extends an already crucial relationship with the talent development programme.

“One of our biggest responsibilities in our community is to inspire young people on their pathways, whether that be through football or other career options,” says NZRL chief executive Phil Holden.

“The Got A Trade? team have helped us tremendously with that and we’re overjoyed to have them on board with our women’s programme, which faces an exciting future on the international and domestic stage.”

What is Got a Trade? Got It Made!

Got a Trade? Got it Made! is the slogan of a campaign jointly owned by industry training organisations (ITOs). The campaign exists to re-position trade careers in the minds of 12-24 year olds and their influencers (parents, principals, teachers and careers advisers).

Trades careers are for people with smarts, who want to do practical and useful work, who want to get financially set up without a loan hanging over their heads and who want to have heaps of options for the future.

Got a Trade Week 2015 (August 21-28) celebrates the talent, skills and value of apprentices and on-job trainees across New Zealand. It aims to increase the understanding, status and demand for vocational learning in the workplace.

The Got a Trade partners are BCITO, Connexis, Competenz, HITO, MITO, Service IQ and The Skills Organisation.

Visit their Facebook page to enter the competition to win a signed Kiwi Ferns jersey.

Paragraph italics – Photo: Kiwi Ferns captain Laura Mariu displays the “Got A Trade? Got It Made!” logo on the test jersey (Patrick Hamilton/Photosport)