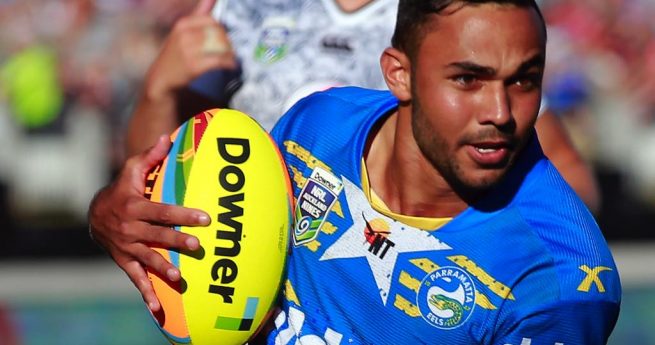 The Dyldam Parramatta Eels have announced a partnership with KARI Aboriginal Resources Incorporated (KARI) as part of the NRL Indigenous Round.

The Eels will wear the KARI logo on the upper back of the club’s first ever Indigenous jersey tonight, with the clash against the South Sydney Rabbitohs being contested for the inaugural KARI Cup.

The partnership will see the Eels and KARI work together on a number of shared projects through both organisations’ commitment to youth in Western Sydney, and the Eels’ public commitment through its Reconciliation Action Plan to develop meaningful partnerships with Indigenous communities and organisations.

Parramatta Eels director, Geoff Gerard, who chairs the club’s Education and Welfare Committee, said the partnership was a natural fit between the two organisations.

“The Eels have been developing mentoring and leadership opportunities for our young Indigenous players with a focus on their educational and career opportunities away from football,” Mr Gerard said.

“To be able to work closely with an organisation such as KARI and learn from their knowledge and experience is a great benefit for us.”

“We are also able to assist KARI in reaching out to their communities through the involvement of Eels players including Luke Kelly and Bevan French, who are both completing Youth Work qualifications.”

KARI Chief Operating Officer, Casey Ralph, who is also a member of the Parramatta Eels Indigenous Reference Group, welcomed the announcement of both the partnership and the inaugural KARI Cup.

“We are thrilled with the prospect of helping young Indigenous Eels players become connected with their local communities through their work placements at KARI,” Ms Ralph said.

“It’s fantastic to see the Eels supporting NRL Indigenous Round in a meaningful way, and we are honoured to be a part of the club’s first ever Indigenous jersey.”

KARI is an Aboriginal community service that operates across Sydney and is recognised as the largest accredited Aboriginal Children’s Service across Australia.

KARI’s broader objective is to build community capacity as well as placing a great deal of emphasis on education, family and child support and employment.