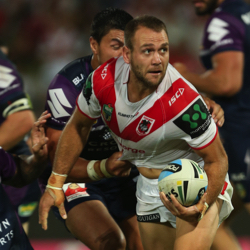 The NRL have released the 2016 Telstra Premiership schedule on Friday, which sees the St George Illawarra Dragons open the season against the Melbourne Storm at AAMI Park, Melbourne on Monday, March 7.

The Dragons first home match of the season will see us host the South Sydney Rabbitohs in a Round 3 blockbuster fixture at the Sydney Cricket Ground on Sunday, March 20.

This Sunday afternoon feature game (4.00pm) will celebrate the 50th anniversary of the Dragons achieving the world-record 11 consecutive Premierships between 1956 and 1966, one of the most significant achievements in the history of Australian sport.

“All the staff and players have been just as eager as our Red V Members and fans to get a look at what our draw looks like for 2016,” said Dragons Head Coach Paul McGregor.

“Today’s release provides us with the opportunity to get a little more specific with our planning and the staff are on it straight away, particularly given all the travel at the front end of the season”.

“With respect to our draw, coaches are never going to be totally happy with things like turn-around times and placement of Bye Rounds amongst other things, but I understand that there are many variables that need to be taken into consideration and respect that the process is complex and that those involved are working to get the best outcomes all round.

“I am really excited about the season ahead as I am sure our Red V Members and fans are too and we are looking forward to having that passionate Dragons support wherever we play in 2016.”

The 2016 schedule features key Dragons home fixtures as some of the biggest events on the NRL calendar once again, including:

The Dragons four home games at Jubilee Oval, Kogarah are:

The Dragons continue to support the Whole of Game Strategy, Right Game Right Venue, which was implemented in 2014 to provide a platform for economic enhancement and growth capability at the Club.

The Dragons will play four home games at major Sydney venues under the Right Game Right Venue strategy in 2016, which are: