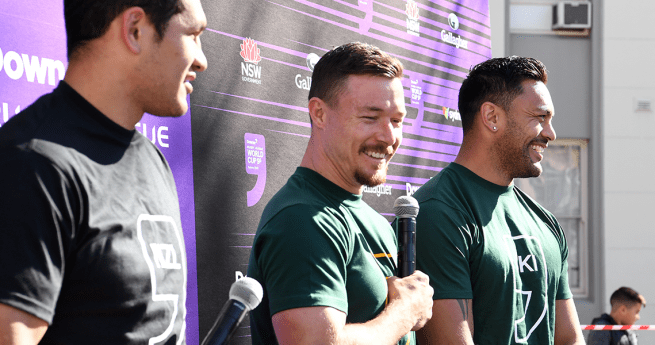 The NRL has confirmed the draw for the Downer Rugby League World Cup 9s, featuring blockbuster clashes between traditional rivals and men’s and women’s double headers.

As part of the 9s tournament, to be held at Bankwest Stadium, Day One (Friday, October 18) is highlighted by:

The NRL will release tickets for individual days for Club Ticketed Members tomorrow (Monday, 5 August) from 10am.

Supporters can attend Friday’s matches from $30 for Adults and $80 for families, while tickets are available for Saturday’s games, including the semi finals and finals of the men’s and women’s tournaments, from $49 (Adults) and $135 (families).

Single day-pass General Public tickets will be available from 10am on Wednesday, August 7.

Fans are also reminded that two-day passes are already on sale ($70 for Adults and $150 for families).

Supporters can take advantage of dedicated team-specific supporter sections, with a flag included in the ticket purchase.

“This tournament is all about entertainment – fans can see some of the best players involved in more than 12 hours of action-packed rugby league across the two days,” Mr Abdo said.

“Having the traditional rivalries of Australia-New Zealand and Tonga-Samoa among other great clashes will be enthralling viewing during the pool stages.

“The rivalries, the men’s and women’s double headers, the colour of the competing fans, will give us wonderful entertainment over two days.

“There will be three hours of top-class Rugby League on Friday, and nine on Saturday, which make our ticket prices incredibly attractive for the entertainment on offer.”

The two highest-placed teams from Group A would progress to the Semi Finals, alongside the winners of Groups B and C.

The two highest placed teams from the Women’s pool, which features Australia, New Zealand, England and PNG, will feature in the women’s final.

All teams would play one match on Friday and a minimum of two matches on Saturday.

RLIF Southern Hemisphere General Manager, Jeremy Edwards said, “The excitement is building for this magnificent event, watching our finest international athletes compete at this super-charged form of rugby league is too good to miss.”

The Downer Rugby League World Cup 9s Sydney 2019 has been secured for Sydney by the New South Wales Government.

Tickets will be available via nrl.com/tickets.

The 12 teams in the men’s competition and four teams in the women’s tournament will compete across 28 matches and 12 hours of action.

Video: RLPA and Men of League...