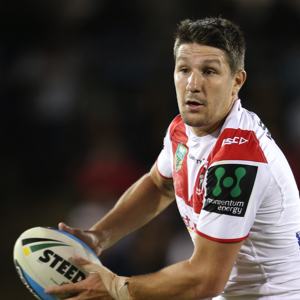 The St George Illawarra Dragons have today officially announced that both Ben Creagh and Gareth Widdop will share responsibilities as joint Captains, with different roles for the upcoming 2016 season.

Local University of Wollongong junior Ben Creagh will remain as Club Captain while five-eighth Widdop has been named Team Captain and will take ownership of all leadership duties and responsibilities in and around game day.

Creagh, 30, a four-time Dragons ‘Player of the Year’, is in the midst of his 14th campaign and has played 267 first-grade games to date.

He is presently just seven games away from overtaking the Club’s All-time Appearance record of 273 presently held by former Club Captain Ben Hornby.

“I spoke with Head Coach Paul McGregor during our annual season review last season about the need to bring in an additional captain given my role had changed since first being named in the role in 2013,” said Creagh.

“This past season I was playing more off the interchange-bench and making less minutes and I believed the team really needed a captain who could play and lead for the entire 80 minutes.

“With a few little injuries, I am not able to train every session of every day and I really believe that you need your Captain out on the field most days during the week as well as that is what is best for the team.

“Gareth’s name was the first that came across both our minds as the next person here to lead the Club and it’s great that Gareth has accepted that role and he really excited about it.”

Widdop, 26, is in the midst of his third season with the Dragons having joined from the Melbourne Storm ahead of the 2014 campaign and has played 118 NRL games to date, including 48 for the Dragons.

The England international admits he is proud of the honour and is looking forward to leading the team by example on the field in his new capacity.

“It’s both an honour and privilege to be named captain of such a proud club like the Dragons,” said Widdop.

“As a child it’s always a dream to someday captain a team so I am very thankful to both Paul and Ben for having faith in me and providing me this opportunity.

“It’s a new challenge in my career but I know I have support around me with Ben as well as the senior leadership group and coaching staff.”

Dragons Head Coach Paul McGregor believes he has two great leaders in Creagh and Widdop who will both complement each other in their respective roles.

“Both Ben and Gareth are two men that lead by example and meet the criteria for what it takes to be captain in their respective roles,” said McGregor.

“I really felt that for the team to move forward we needed a captain who could play the entire 80 minutes and with Ben now playing in the middle and being regularly interchanged, for me Gareth was the right person.

“Gareth is in an important position, he is on the field and on the ball for most of the game and is at the right age. I also see it as an important part of his development.

“Ben will still play an important role outside of game day instilling the culture and values that are held here at the Dragons.

“Ben is in the twilight of his career and I would really like him to enjoy his footy and not have to concern himself too much about game day other than going out and doing what he needs to do for the team.”