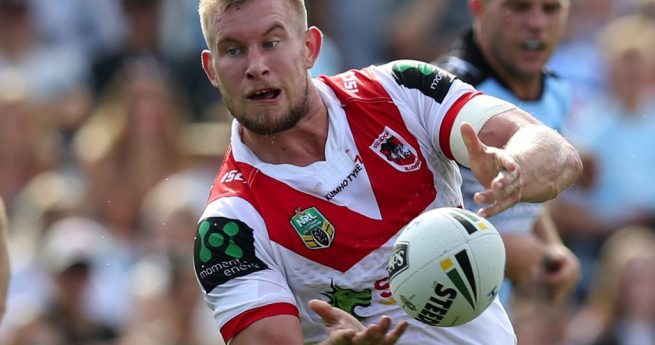 The St George Illawarra Dragons have agreed to a release request from Mike Cooper that will see him depart the Club at the end of the 2016 season.

Cooper’s current playing contract was until the end of the 2017 season but he has requested the early release on compassionate grounds to enable his family to return home to the United Kingdom.

The England international will return to his local club the Warrington Wolves in the UK Super League.

“It was a hard decision to make but both my partner and I have decided that is what is best for our young family is to return home at the end of the year,” said Cooper.

“It’s not a decision that we have both taken lightly and we both spent a lot of time thinking about what was best moving forward for the three of us.

“We will have been here three seasons come the end of the year and that is a long time to be away from family and friends, especially when you have a young child.

“Paul McGregor was a bit shocked and disappointed but I can’t credit him enough as he respects the decision and understands the reasons completely.

“He has brought me on in leaps and bounds as a player and I owe a lot to him and his staff.”

Cooper made his first-grade debut for the Dragons in the opening round of the 2014 campaign against Wests Tigers and has made 59 appearances to date.

“This request came as a surprise to us, we hoped and planned for Mike to be a part of our Club long-term,” said Dragons Director of Rugby League Pathways, Ian Millward.

“In saying this, we understand and respect his family situation and will honour his request.

“Warrington worked with us to enable Mike to come to the Dragons three seasons ago and we understand why they are keen for him to return.

“Everyone here knows how committed Mike is to finishing this season and his NRL career on a high.”