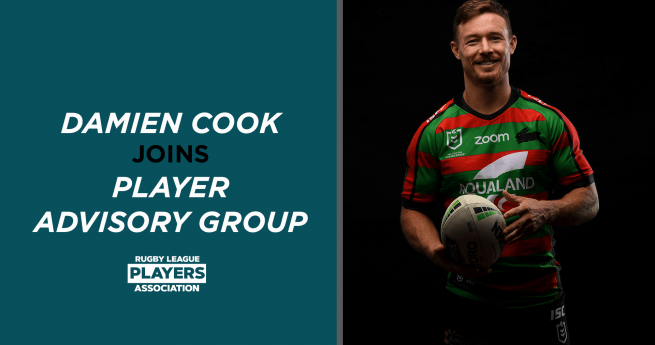 The Rugby League Players’ Association (RLPA) established the PAG in 2019 to provide leading players with a forum to have a voice on key challenges facing the game.

The PAG played a key role recently for the RLPA as the game navigated its way through the COVID-19 pandemic, with Cook and other delegates also making significant contributions throughout the process of returning to the field.

Cook has been involved with the RLPA for several years and is a current Player Delegate at the Rabbitohs alongside Thomas Burgess, Cameron Murray and Braidon Burns.

Cook said he was excited to join the RLPA’s Player Advisory Group after seeing the impact it has had in advancing the interests of players and the game.

“I’ve really enjoyed the role of an RLPA delegate in recent years and I’m looking forward to contributing in other ways by joining the Player Advisory Group,” Cook said.

“I see this as an opportunity to proactively contribute to areas that we don’t usually focus on as delegates.

“I believe I have a lot to offer the game and my fellow players, so meeting regularly with this group is a great way to harness that and use it in a constructive way for the Association and the game.”

“Damien is an outstanding addition to this leadership group, and we are excited to have him involved,” Newton said.

“As an RLPA delegate, Damien has already made a significant contribution to the RLPA, and we know he is passionate about advancing the interest of his fellow members and the game.

“We look forward to working more closely with him, and the essential insights he will provide to assist with guiding the strategic approach of the RLPA.

“We are proud to have such an impressive group of players involved with our Player Advisory Group, and the level of engagement has been first class.”

The PAG operates between the RLPA delegate structure and the Board of Directors.

The group will continue to meet regularly in 2020 to discuss the game’s challenges and opportunities – using their insights and feedback to help inform the approach of RLPA management.