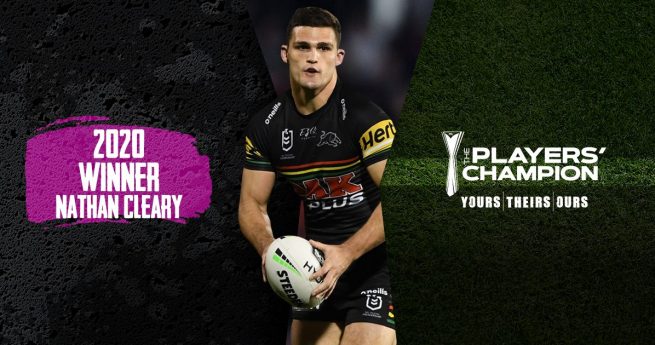 Penrith Panthers halfback Nathan Cleary has been voted the best NRL player in 2020 by his peers, capping off a sensational season to be awarded The Players’ Champion.

Cleary was announced as the recipient of the Rugby League Players’ Association (RLPA) honour live on Nine’s broadcast of the 2020 Grand Final tonight.

The playmaker secured the win ahead of his fellow finalists James Tedesco, Luke Keary, Josh Papalii and Roger Tuivasa-Sheck and joins an illustrious list of previous winners.

The Panthers star was instrumental in leading his side to both the Minor Premiership and a place in the NRL Grand Final – scoring 200 points, seven tries and 17 try-assists in a remarkable season.

The 22-year-old is the second Panthers player to win The Players’ Champion – joining Petero Civoniceva (joint winner in 2008) on the honour roll.

Sydney Roosters backrower Hannah Southwell received the same honour for her outstanding efforts in the NRLW – with the hard-hitting backrower accepting the peer-voted award following her side’s Grand Final against Brisbane.

In the Rookie of the Year category, young gun Harry Grant was voted the best by NRL players after a breakout season with Wests Tigers.

The Players’ 13 Dream Team was announced for the third straight year – with the team based on the accumulated votes for The Players’ Champion NRL.

Cameron Smith joined finalists Cleary, Keary and Tedesco to form a formidable spine, with the team being somewhat dominated by Roosters with the inclusion of Brett Morris and Sio Suia Taukeiaho.

The Dennis Tutty Award and the NRL-RLPA Wellbeing and Education Academic Awards will also be announced in the coming weeks.

RLPA Chief Executive Officer, Clint Newton, congratulated all award recipients for excelling in the unique conditions that the 2020 season presented.

“I would like to congratulate both Nathan and Hannah on being voted by their peers as the game’s best for 2020,” Newton said.

“Nathan has produced an exceptional year for the Panthers, leading them to the minor premiership and Grand Final in the most challenging of conditions and circumstances.

“He will go down in our history books as the best player in the eyes of those who take the field after a season like no other and is a very-deserved winner of the award.

“Hannah had an exceptional year for the Roosters and was integral in their resurgence to book a place in the decider after missing out in 2019.

“The votes were close again this year, with Hannah receiving the ultimate recognition after a stellar season with the tricolours.

“Achieving this accolade is incredibly difficult due to the depth of talent and class amongst the playing ranks, but the challenges our members have faced this year have been extraordinary – so it’s a massive achievement from Nathan and Hannah.

“I’d also like to thank Nine for their support in elevating the award this year through its inclusion in the Grand Final broadcast and our partners at Unyoked for providing innovative and meaningful prizes for our award winners.”

The Players’ Champion winners for 2020 will be rewarded with a special ‘wilderness prescription’ – with the RLPA partnering with Unyoked.

Previously Elite Women’s Player of the Year (below)

Finalists announced for the...