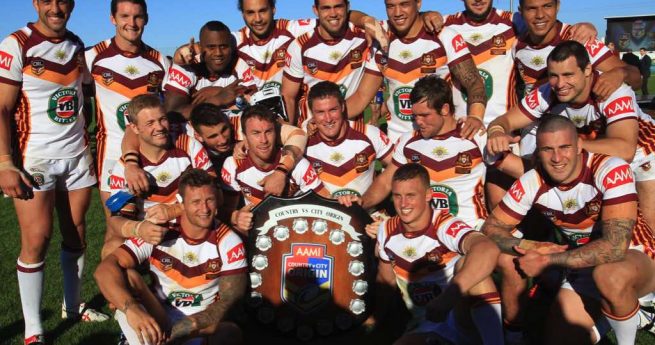 In a wonderful result for Country Rugby League, the final tickets were sold today to an excited public eagerly awaiting to see their NRL heroes take the field at Scully Park Regional Sporting Precinct at 4pm on Sunday afternoon.

This is the second year in a row that the annual fixture has sold out after last year’s game in Wagga Wagga sold out prior to kick-off.

“We are very proud to see the annual Country v City fixture sell out for the second successive year,” said Quinn.

“The Country team have spent a lot of time visiting schools and getting out amongst the local community this week and they’ve really noticed a great vibe around this year’s game.

“This is a reflection of the passion people have for Rugby League in the Country and we’re looking forward to a great event tomorrow at Scully Park.”

VB Country Origin Coach Craig Fitzgibbon wanted to thank the people of the North West for their support.

“It’s a great feeling to know the game has sold out and the players can’t wait to get out there and represent Country.

“I just want to send my thanks to the people of Tamworth and the North West for creating a great atmosphere and making the players feel welcome throughout the week.”

“The Country-City fixture is one of the most rewarding weeks on the Rugby League calendar. To see the smiles on these people’s faces when we walk through the streets is something very special,” KARI City Origin Coach Brad Fittler said.

“For many people in the country, seeing these players in their hometown is a once in a life time opportunity. It’s great to see the people of Tamworth supporting Rugby League and purchasing tickets to tomorrow’s match.”

Photo: James Maloney captained the Country team that won the trophy in 2015. (nrlphotos.com)

Playing career over for Moltzen