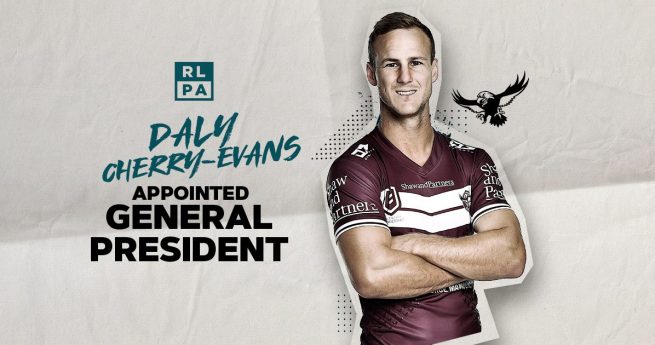 The Queensland Maroons and Manly Sea Eagles captain has served as an RLPA Director since 2019 and has been a strong advocate for the Association as part of the Player Advisory Group (PAG) and Delegate structure in recent years.

Cherry-Evans will fill the vacant position left by Cameron Smith, who held the position since 2017 before officially announcing his retirement from the NRL earlier this month.

The RLPA also welcomes a new addition to its Board of Directors, with Melbourne Storm and Queensland forward Christian Welch elected to the position alongside fellow players Cherry-Evans, Wade Graham, Sia Soliola and Dale Copley.

The Board of Directors will operate with two non-financial Directors in Chair Dr Deidre Anderson and Pippa Leary, with Nimesh Shah stepping down from his position after four years of service.

Welch has also been influential for the RLPA in recent years, progressing through the leadership pathways to fill the position left vacant by Joel Thompson.

Dr Anderson, who was also re-elected to a further term as Chair during the AGM, congratulated Cherry-Evans and welcomed Welch to the Board of Directors.

“On behalf of the RLPA Board, I would like to congratulate Daly on his appointment as General President,” Anderson said.

“It is with great pleasure that I also welcome Christian to the Board of Directors following his election at tonight’s AGM.

“Both Daly and Christian are tremendous individuals and leaders amongst the playing group, and we are proud to have them in key positions with the Association.

“I would also like to recognise the significant contribution of Joel Thompson and Nimesh Shah who have concluded their duties with the RLPA Board.

“Both spent considerable time as Directors and were instrumental in advancing the interests of players by adding valuable guidance in their respective areas of expertise.

“Finally, I would like to pay tribute to Cameron for his service as General President since 2017 and congratulate him on a phenomenal contribution to the game – both on and off the field.”

Cherry-Evans said he was honoured by the appointment and is looking forward to using this platform to advance the collective interests of players.

“I’m definitely honoured to appointed General President and to be able to do this job for the playing group,” Cherry Evans said.

Welch said he was excited to join the RLPA Board and make a valuable contribution to his fellow players and the game.

“Being able represent my fellow players as a Director of our Association is something I’m really excited about,” Welch said.

The AGM also provided an opportunity to reflect the various challenges presented during 2020, the influence and achievements of the RLPA and an update on the strategic priorities moving forward.

RLPA BOARD OF DIRECTORS

Statement - Article in The...