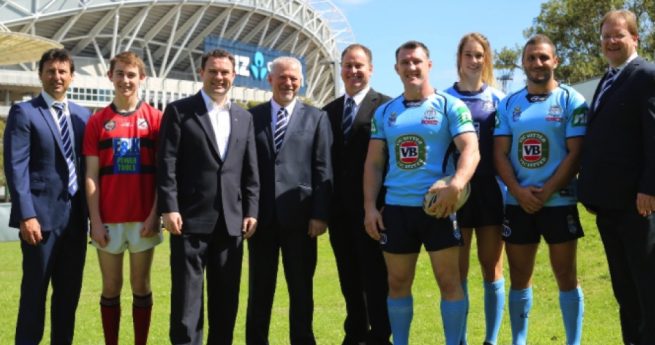 NSW Rugby League (NSWRL) is very pleased to confirm it will have a new home at Sydney Olympic Park by the end of 2017.

NSW Minister for Sport Stuart Ayres today announced plans for a new $20-million NSWRL Centre of Excellence, which he believes will be a “game-changer” for rugby league in the State.

“For over a century, NSW has been the spiritual home of Rugby League. This complex will provide a pathway for emerging talent from junior representative sides through to the NSW Blues State of Origin team,” Mr Ayres said.

“The NSW Government is committed to providing the highest quality facilities to ensure the longevity and future success of Rugby League in this State.”

The Centre of Excellence will include a full-size training field between the Athletic Centre and ANZ Stadium, and a new building for specialised support facilities and the offices of the NSW Rugby League.

This facility will also adjoin a tunnel providing direct access to ANZ Stadium – originally built to transfer track and field athletes during the Sydney 2000 Olympics.

NSWRL Chairman Dr George Peponis said: “The Centre of Excellence places NSWRL at the forefront of sporting organisations in Australia.

“Most importantly, it is the obvious home for NSWRL, just across from ANZ Stadium, the home of the NSW Blues.”

NSWRL Chief Executive David Trodden said: “The fantastic support which the New South Wales government and Sydney Olympic Park Authority have given to us sets our game up for long-term success at all levels.

“The benefits will extend to everyone in the NSW Rugby League family. Our junior players, refs and women’s teams will all have use of the facility and, at times, the other specialist sports grounds in the precinct.”

NSW State of Origin coach Laurie Daley said: “We finally have a place that we can call home.

“And there is no doubt this will improve our preparation. The access to state-of-the-art facilities at the Centre of Excellence, as well as the other facilities in the precinct, creates a wonderful opportunity.

“Having the Centre of Excellence here will add to the home ground advantage of ANZ Stadium.”

The NSWRL Centre of Excellence is expected to be completed in late 2017.