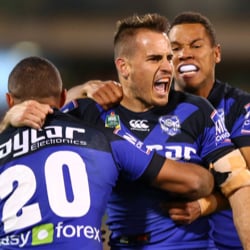 The Canterbury-Bankstown Bulldogs are excited to announce that the NRL side will play a ‘home’ match against the New Zealand Warriors at Westpac Stadium, Wellington, in 2016.

To coincide with the full draw being released today, the Bulldogs will take on the New Zealand based side in Round 7 of the regular season on Saturday, 16 April at 7.30pm (NZ Time).

As in previous years, the Bulldogs have taken select matches away from ANZ Stadium and used them as an opportunity to grow the game in areas that are seen as potential growth areas for both the club and the NRL.

“It’s no secret that with the large number of New Zealand born players in our squad that we have a huge following in New Zealand,” Chief Executive Raelene Castle said. “With the local support that the Warriors enjoy in Wellington, this will be an opportunity for us to put on an event that we hope the whole region will come out and enjoy.

“Our home matches for 2016 will now comprise of nine matches at ANZ Stadium, two games at Belmore and this fixture against the Warriors in Wellington.

“It’s about selecting the right games and playing them at the right venues and this is a great opportunity for us in New Zealand.”

Chief Executive Officer of Westpac Stadium, Shane Harmon, is pleased the Bulldogs have agreed to host a match at the venue.

“Wellington sports fans will welcome the opportunity to host these two great sides in action once again at Westpac Stadium. We have hosted the Bulldogs on several occasions in the past and this will be an exciting fixture to add to Wellington’s sporting calendar in 2016.”

For more news from the Bulldogs visit their website.