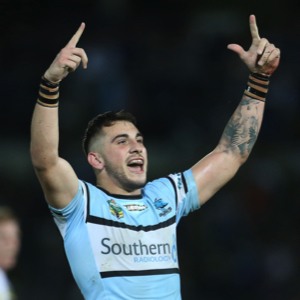 In a major boost to the club young gun Jack Bird has signed a contract extension which will see him remain at the Sharks through until at least the end of the 2017 season.

The 2015 NRL Rookie of the Year, Bird has agreed to new terms for 2016 and a 12-month extension into 2017, with Sharks coach Shane Flanagan pleased the club has been able to come to terms with the outstanding youngster.

“The members and fans might wonder why it all took so long, but I was always confident he was going to stay. It was just drawn out due to the details of the contract,” Flanagan said. “He has a long career ahead of him and it started here so we look forward to having him around for a few more years.

“Young players like Val Holmes, Ricky Leutele and Sosaia Feki are the future of our club and its great Jack will also be a part of it.”

After signing on the dotted line Bird spoke with anticipation and relief, in putting to rest continued speculation as to his immediate future.

“I always knew I was going to sign here, I just didn’t know when,” Bird said. “I’m pretty excited about the year ahead and happy to announce I’ll be in the black, white and blue for the next two years.”

In what was a stand-out rookie season in the NRL for the 20-year-old, Bird made his top grade debut in round four last year in a match against the Gold Coast Titans, before playing the next 22 games straight.

Following his debut match Bird was promoted into the starting side, turning in a stand out performance in a victory over the Sydney Roosters.

Bird finished the year with eight tries in his 23 games, while also earning a senior level representative cap after playing for Country Origin against City. In further recognition of his outstanding season he was named NRL Rookie of the Year, beating out an impressive list of first-year players.

As to where he may fit into the Sharks side next year, coach Shane Flanagan is confident he will be somewhere in the run-on 13, however considering Bird’s talent and versatility is not 100 percent certain of in what position that might be.

“There is a lot of competition for spots in the team, which is a great position for us to be in and Jack understands that. He’ll be in the team somewhere and training and trials before the start of the season will determine where that is,” Flanagan said.

When quizzed on the same topic, one which has created plenty of media discussion, Bird’s response was straight forward and to the point.

“I’m not demanding a position at all. I’ll just be happy to be in the team and to play where Flano needs me to play,” Bird added.

For more news from the Sharks visit the team website.