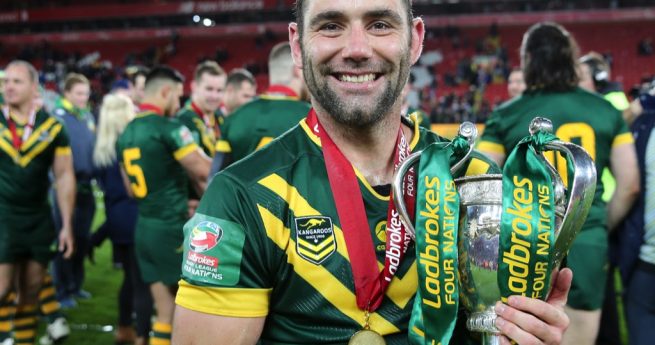 Australia has reclaimed world number one status with an impressive 34-8 victory over New Zealand in the Ladbrokes Four Nations final at Anfield in England.

The Kangaroos had opened up a 24-0 lead by half-time and whilst the Kiwis picked up eight points they conceded ten in the second half to an Australian outfit that dominated the tournament.

It was the sixth straight win for Mal Meninga who, earlier this year, took over the reigns as Kanagaros coach.

Handling errors from the Kiwis were a significant factor in the result while the Australians clocked up an impressive completion rate in front of the 40 thousand fans who turned out at the home of Liverpool Football Club.

A cut out pass from full-back Darius Boyd set up winger Blake Ferguson for the first try straight from a scrum after only two minutes. Thurston slotted the conversion to give the Kangaroos six points.

Not long after a strong attack by winger Valentine Holmes saw Boyd put Josh Dugan through a gap for the first of his two tries.

It went from bad to worse for the Kiwis as Australian captain Cameron Smith punished a handling error  to put Trent Merrin over for a try midway through the first half.

Thurston added more points to the tally off the back of Kiwi penalties and eight minutes before half time placed a grubber kick through for Dugan to scored a fourth try for Australia.

The Kangaroos came out of the sheds and picked up where they left off with Boyd scoring a try four minutes after the break.

Ten minutes later Jordan Kahu gave the Kiwi fans something to cheer for when he scored off a pass from Kevin Proctor.

Just shy of the 70 minute mark Kahu went over again but  minutes but neither conversion was successful.

The sixth Australian try came when Boyd Cordner forced his way over with less than ten minutes remaining on the clock and Thurston slotted his fifth goal to wrap up the scoring.