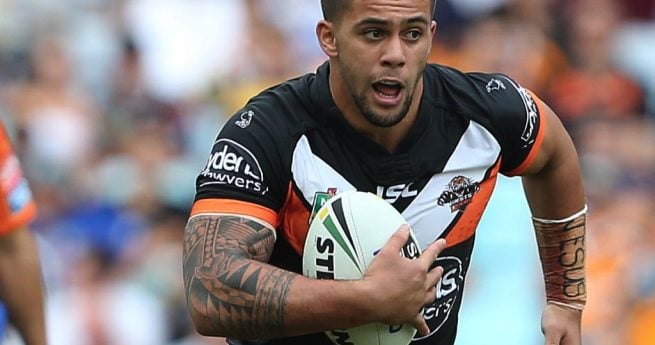 The 20-year-old made his NRL debut in the Club’s Round 1 win over New Zealand at Campbelltown Sports Stadium and has been part of the first-grade side in every game this year.

Aloiai joined Wests Tigers last November after securing a release from the Parramatta Eels and has impressed during in his eight NRL appearances in 2016.

The Glenora Bears junior has the ability to slot in anywhere in the forward pack and has been named on the interchange bench for tomorrow’s game against South Sydney at ANZ Stadium.

Aloiai expressed his excitement to have secured his future at the Club beyond this season.

“I’m really thankful and privileged for the opportunity to re-sign with Wests Tigers,” Aloiai said. “I have rekindled my love for rugby league (since joining Wests Tigers) and I’m really enjoying my footy again.

“It has been a big transition (playing in the NRL) but I’m definitely adapting to it and I’m trying to build my game each week to become a better player.

“Right across the board from the coaching staff to the players, we have a great bunch of people at the Club and I’m really happy to be here.

“I think the main goal for me this year is helping our team get some wins on the board and to gain momentum, while also developing further as a player.”

Wests Tigers Head Coach Jason Taylor said Aloiai has been a great addition to the playing roster this year.

“Josh’s attitude and commitment to training and also to the Club is outstanding,” Taylor said. “The best sign for the Club moving forward is how passionate he is about playing for Wests Tigers and how much he is enjoying his time here.

“He suffered a really bad hip injury at Parramatta and it’s a sign of the player he is and how hard he is prepared to work the way in which he has come back from that.

“Josh is a great person and great role model, even at such a young age, so we are really pleased to be able to extend his contract with Wests Tigers.”

The new deal will keep Aloiai at Wests Tigers through until the end of the 2017 season.

Photo: Josh Aloiai in action against Parramatta in Round 4 of the 2016 Season (nrlphotos.com)