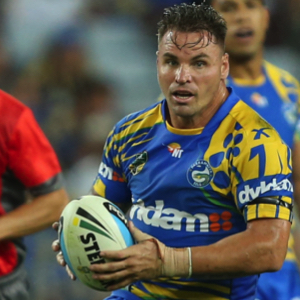 Anthony Watmough has been welcomed into an exclusive Club after becoming only the 23rd player to contest 300 first grade NRL games.

Watmough, who made his debut in 2002 against the Melbourne Storm playing for the Northern Eagles, was again up against the Storm for his 300th game but this time in the blue and gold of the Parramatta Eels.

Unfortunately for Watmough an arm injury saw him leave the field with 17 minutes remaining but his teammates ensured his milestone was marked with victory with the Eels 26 scoring a four point win over the Storm 22.

On behalf of his peers we congratulate Anthony ‘Choc’ Watmough for his 300 Game achievement.