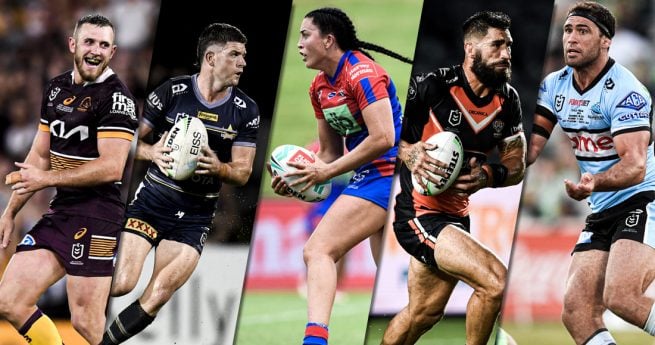 The collective unity of the players has been strengthened ahead of the Collective Bargaining Agreement negotiations with the NRL. The Rugby League Players’ Association has now finalised their Men’s and Women’s Player Advisory Group for the 2022 season.

The RLPA welcomes the addition of four new senior leaders to the MPAG today, lead by General President Daly Cherry-Evans:

Presidents Daly Cherry Evans and Hannah Southwell said: “We are delighted that such a deep pool of talented and passionate leaders are joining our PAGs at a critical moment in our game. We also extend our sincere gratitude to departing leaders Blake Green, Alex Glenn, Michael Morgan, Dale Copley, Sia Soliola and Amber Pilley who have advocated for players’ rights and progress tirelessly.”

Chad Townsend said he is joining the Men’s Players Advisory Group to guarantee the best terms and conditions ever for NRL players.

“I want to help the players secure the best CBA in the history of the game,” said Chad Townsend.

“I am passionate about players’ rights. I want to help make a difference for not only players of today’s game, but for the players of the future.

“The PAG is a group of committed players, giving up their time to represent the collective group. The group only wants what’s best for the players. The vital role the PAG plays is to advocate strongly alongside the RLPA and give feedback on all facets of our working conditions.”

“The RLPA ensures that we have the best and fairest working conditions possible, lead by Clint Newton and an unbelievably passionate team. Without the entire team working in unison we would not have the standards and conditions we currently have and we’re just getting started.”

New Brisbane Broncos recruit Kurt Capewell is another new addition to the MPAG. Kurt began as a Club Delegate at the Penrith Panthers during their Premiership season last year.

“I joined the advisory group because I saw an opportunity to be a part of something that can make an actual difference, and help voice the opinions of players from all over,” said Kurt Capewell.

“While I’m part of the Men’s Player Advisory Group, I would like to make positive changes for the playing group whilst building a strong bond with the NRL to help grow our game.”

“The RLPA is an essential piece of the NRL puzzle when it comes to growing our game. Not only does it allow all players to have input and a voice, it gives us a combined platform to work hand-in-hand with the NRL.

“The PAG allows players to have representatives scattered throughout Clubs. This helps in assisting players to voice their opinions and also relay anything from the NRL directly to the playing group.

“The Men’s Players Advisory Group has been very effective in recent times. It will continue to work together to be the connecting piece from the playing group to the NRL.”

Tom Symonds, an RLPA Player Operations Manager and previously a Delegate during his playing days, said that the MPAG has gone from strength to strength over recent years.

“We set up the Player Advisory Groups so that some of our most passionate players could discuss and provide direction on key issues alongside leaders from other playing groups,” said Tom Symonds.

“This group of players sit near the top of our leadership structure and have significantly assisted with bringing forward the views of the entire playing group. The amount of progress and outcomes the MPAG has achieved over the past few years is proof of the PAG strategy working.

“Some of our best leaders have finished their roles on the MPAG after retiring in 2021, but the quality and commitment of our Delegates gives us great confidence that several other knowledgeable and passionate players will always be ready to step up.

“It’s going to be an important year for the playing group as we negotiate their CBA. However, the players on our MPAG in 2022 are ready to be front and centre in helping secure the best and fairest terms and conditions available.”

Lina Caccamo, the RLPA’s General Manager of Elite Women, has said that the Women’s Player Advisory Group has already been instrumental in improving the NRLW competition.

“Our WPAG members have been able to significantly influence the structure and development of the game, and it has been fantastic to watch them establish themselves as leaders not only within the RLPA, but also within the women’s sport community,” said Lina Caccamo.

“Over the past two years, the WPAG has been leading the way for improvement of the NRLW. Our player leadership is centred around ensuring all voices are heard and represented, and these players are an integral part of making all that work.

“This group will pave the way for generations to come, as it will play a crucial role in the negotiations for the first ever Women’s Collective Bargaining Agreement.”

There have also been several new male Delegates stepping into leadership positions at the RLPA, including Latrell Mitchell, Junior Paulo and Tohu Harris.

Delegate roles have also been established for NRLW players for the first time ever, with 11 players stepping into leadership positions across the playing group, including Kennedy Cherrington, Tazmin Grey and Yasmin Meakes.

“The creation of the Men’s and Women’s Players Advisory Groups has been a successful strategic decision from the players. Every year the groups are getting more outcomes and making more progress for the game.”

“I’ve never seen the players more engaged and more knowledgeable about their rights and entitlements. I’ve also never seen them more committed to achieving results through their collective unity. These results will not only benefit our current players, but both past and future players too.”

“It’s important we hear the views of the entire playing group to form our collective position, and the Delegates and MPAG are crucial to the work the RLPA do.”

“The Men’s Player Advisory Group is another example of what makes the RLPA truly player-led. We are proud that Dale, Chad, Kurt, James and Romy will work with the rest of the Player Advisory Groups this year. They will play a vital role for all players in the NRL and NRLW by continuing to bring forward and represent the views of rugby league’s incredibly diverse playing group.”

“With the Collective Bargaining Agreement negotiations coming up, 2022 is going to be a significant year for the Men’s and Women’s Player Advisory Groups. All players on the Advisory Groups are going to be fundamental in achieving the best terms and conditions for our past, present and future male and female players.”

Progress made but concerns...