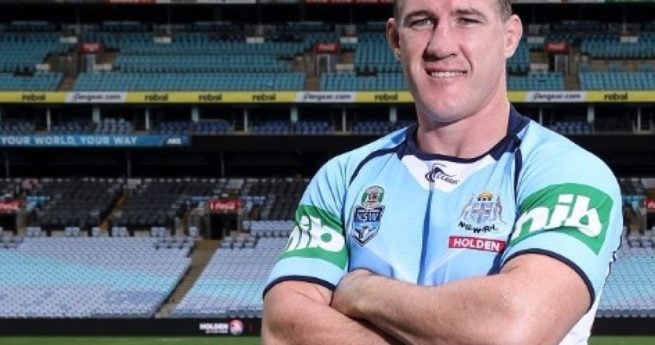 NSW VB Blues captain Paul Gallen is set to join Brad Fittler and Andrew Ettingshausen as the most capped NSW Origin players when he retires at the end of this year’s series.

Gallen has today officially announced that the 2016 Holden State of Origin series will be his last, which will see him finish with 24 NSW Origin appearances should he play all three matches, overtaking coach Laurie Daley and Andrew Johns (23) as the third most capped Blues player behind Ettingshausen (27) and Fittler (31).

“Paul has been a great warrior for NSW and now that he’s made that call he’ll be doing everything he can to go out a winner,” Daley said.

“There are not too many players who have played 20 plus games for NSW, so fingers crossed he can stay injury-free and go out on his own terms.

“He will be remembered as a player who left nothing in the sheds. He has given everything to the Blues jumper, expending all his energy on the field and giving it his all for his team-mates.”

Gallen’s Origin high-point is without doubt the 2014 series, where he guided NSW to their first Origin triumph in nine years in front of a sell-out crowd at Sydney’s ANZ Stadium.

The winning Origin captain conceded his most recent injury in Cronulla’s season-opener against the Cowboys was the catalyst behind his decision to step aside following this year’s campaign.

“It was probably after I did my knee in Round 1. I just had a chat with my missus and a few close friends and probably thought it was time to give it one last crack and move on,” Gallen said.

“I’ve had some great times here. I just want to have one more good time and hopefully finish with the win.

“Unfortunately I’m not going to be seen for having the success that others have had because of NSW’s success. But I don’t think there’s a doubt as to why Queensland hate me so much, and that’s because I do my job on the field. I’ll always be proud of that.

“I’ve always put my foot forward for anyone I’ve played with. I think I’ll be remembered as a tough, good Origin player and hopefully I can go out on a high.”

Trodden believes Gallen will go down as one of the state’s most fierce competitors.

“In every football team there is always one or two players that define what the whole team is about. Paul Gallen’s legacy for NSW is that in recent years, he’s been that player,” Trodden said.

“Paul has been a stalwart of the game. He has always led by example, is respected by his team-mates and the player they want in their corner when the going gets tough. Over the years, he has matured into an inspirational leader,” Dr Peponis said.

This is Origin launched