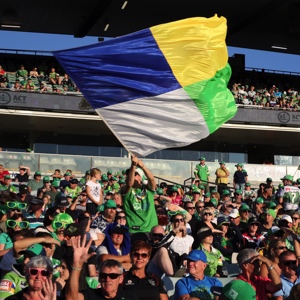 The Canberra Raiders have reached a huge milestone ahead of their first home game of the season, breaking through the 11,000 member mark and eclipsing last year’s season total.

The clubs wide range and value for money membership offerings have been well received by supporters of the club, with members signing on in record numbers to get behind the team in 2016.

As part of the membership push, the Raiders and Canberra Region Rugby League announced an exciting new partnership last week, where all registered players in both the senior and junior competitions will receive a four game Raiders membership for the 2016 season, proudly provided by a third party.

This allows participants to attend four Raiders matches during the course of the season and will enhance the community connection of the game at an elite and grass roots level.

Canberra Raiders CEO Don Furner said the club was on track to reach their goal of 15,000 members for the season and thanked everybody who had already committed to the Green Machine for 2016.

“We want to give all of our members a huge thank you for enabling the club to reach 11,000 members before the season starts. It’s a huge positive for the club and we are working hard on increasing that number to 15,000 this season,” Furner said. “There’s plenty of excitement around the team this pre-season and we’ve worked on making sure the game day experience and membership offerings are the best we’ve ever rolled out

“Being a member of the Raiders is more than just a ticket to the game, with exclusive merchandise, opportunities and discounts available before you even walk through the gate at GIO Stadium. We want our members to feel like they’re a part of the Raiders family.

“We’re now encouraging everyone who has signed up so far to make sure they get to GIO Stadium on Saturday afternoon and support the team in their first home match of the season.”

Memberships are available starting from just $30. Visit www.weareraiders.com.au to sign up today.

To date there has been 3500 registrations for the local competitions, with all participants to receive their four game memberships from May.